As tensions rise in Mogadishu, residents of the Somalian capital flee their homes, fearing armed clashes will renew in their neighbourhoods.

Over the past few days, military forces opposed to President Farmajo's term extension, took over positions in Mogadishu, barricading roads along Maka al Mukarrama, a key road that is often used by the government officials.

On Sunday night, sporadic bursts of heavy gunfire rang out across the capital after fighting broke out between government forces and soldiers allied along clan lines to various opposition leaders.

They asked locals to leave the area.

"Armed men dressed in military uniforms, they came to us at 2.30 am local time and told us to leave and escape with our wives and children" say Abdi Ali Abdi, a resident of Mogadishu.

"I am talking to Farmajo (, the president), if he sees or hears me. I want to tell him that the opposition wants you to leave office, what do you have for us?" says one Mogadishu resident.

"Your term expired, you should leave the presidency, you can’t extend your mandate for two more years. Former presidents left office after their term expired, please leave and save the civilians."

"Former president Farmajo is a dictator... he wants to stay in power with force. We are against that, we will continue fighting until he leaves," said military commander Abdulkadkir Mohamed Warsame, who backs former Prime Minister Hassan Ali Khaire and was running against Farmajo for the presidency.

"Now we want to take over the presidency," said Warsame, adding the opposition controlled the northern Hawle Wadag district.

"We will not stop our fighting -- we can stop only when we die."

The fighting had "sharpened" clan divisions in the capital and set the stage for more violence along those lines, said Somalia analyst Omar Mahmood.

"Any sort of miscalculation could happen... it just takes one trigger-happy soldier to fire on the other side, and that's going to erupt those dynamics," the senior analyst for the International Crisis Group told AFP.

Former president Hassan Sheik Mohamud said Sunday that "forces loyal to" Farmajo had attacked his house. The government denied this, saying security forces had foiled attacks by an "organised militia".

While schools and universities were closed, life in some of the unaffected neighbourhoods proceeded much as usual. 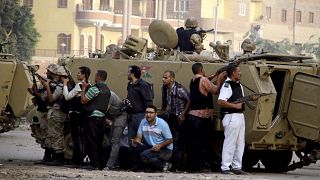