Scenes on the street and a market in the Nigerien capital of Niamey. Despite little sign of the first of a three-day mourning after attacks by suspected jihadists killed 58 people near the Mali border, residents and a community leader express condemnation and shock at the killings.

On Monday afternoon, "groups of armed, still unidentified individuals intercepted four vehicles carrying passengers back from the weekly market of Banibangou to the villages of Chinedogar and Darey-Daye," the government said in a statement read out on public television on Tuesday.

"The toll from these barbarous acts (is) 58 dead, one injured, a number of grain silos and two vehicles burned and two more vehicles seized," it added.

No group claimed responsibility, but Niger is struggling with two jihadist campaigns -- in the west near Mali and Burkina Faso, and a decade-old insurgency in the southeast on the border with Nigeria.

The raids took place in the Tillaberi region located in the "tri-border area" -- a flashpoint zone where the frontiers of Niger, Burkina Faso and Mali converge.

Earlier, a local resident had told AFP that the raids began with an attack on a bus travelling to Chinedogar, in which "around 20 people were killed."

Another resident said those killed had been shopping at Banibangou, a major market town just a few kilometres (miles) from the Malian border.

"Armed bandits" then attacked villages at around 6 pm, killing about 30 people, a security source said.

The government announced three days of national mourning from Wednesday.

It called for "greater vigilance" from the population and reaffirmed its "determination to relentlessly pursue the fight against criminality in all its forms".

Niger is part of a France-backed alliance of countries in the Sahel region battling militants, including some in a group aligned with the Islamic State known as ISWAP -- an offshoot of Boko Haram.

Hundreds of lives have been lost, nearly half a million people have fled their homes, and devastating damage has been inflicted.

On January 2, 100 people were killed in attacks on two villages in the Mangaize district of Tillaberi.

The massacre, one of the worst in Niger's history, occurred between two rounds of the country's presidential election.

In December 2019, 71 Nigerien troops died in an attack at Inates, and the following month 89 were killed in an assault on their base at Chinedogar.

Along with central Mali, the lawless tri-border area sees the most frequent and deadliest jihadist attacks anywhere in the Sahel region.

French forces working with local troops have stepped up operations in the region since early 2020, following the string of attacks on military camps that killed hundreds of soldiers. 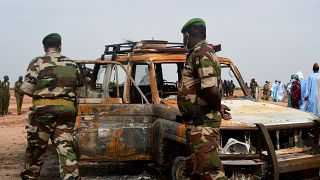