During a press conference in Dakar, the leader of the PASTEF opposition party announced his intention to bring the West African country's religious figures in the debate.

"We asked the religious authorities to help - because nothing can come out of a dialogue held only between political actors - and to be guarantors of what should be done, especially on the question of the third mandate. We don't want to hear about it anymore."

"It is no longer acceptable for anyone in Senegal to stand before the people, and think, for a fraction of a second, that they will be allowed to serve a third term. It is out of the question, and the day someone wants to do so, we will remove him from the presidential palace" Ousmane Sonko said.

Since his arrest in last February, Ousmane Sonko has risen to become the main opponent to President Macky Sall.

Many Senegalese took to the street, as they saw in the opposition member of parliament a solution to many of their problems, such as poverty and unemployment.

"The entire Senegalese people rose up together. Never in the History of Senegal have we seen this", cheers Ousmane Sonko.

"The whole political class, the civil society, citizens stood together to say that enough is enough. But we must understand that this movement is not only linked to the Ousmane Sonko case. It is the accumulation of a set of frustrations, refusal and rejection of Macky Sall's methods."

Ousmane Sonko has received the support of several opposition leaders, such as former Dakar mayor Khalifa Sall, a long-standing opponant of President Macky Sall, who claims Senegal is at a turning point.

"What we are experiencing today is the start of a new beginning in the construction of this country" Khalifa Sall claims.

"A new beginning, so that democracy can continue to improve and be put in application in the best conditions for all and by all."

Even though Saturday's protest was called off, supporters of Ousmane Sonko have said they might take again to the streets, should their demands be ignored by the Senegalese authorities. 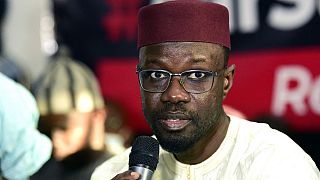