A confidential document which tends to demonstrate a little more the share of responsibility of France in the genocide of Tutsi in Rwanda has now been released. Some have described it, the missing piece of a dark episode in history.

The telegram, which dates from 1994, was published by Médiapart and clearly shows that the former French government somehow let the genociders escape at the time.

On July 15, 1994. members of the government responsible for the massacre of the Tutsis are in an area controlled by the French army. The the French ambassador to Rwanda Yannick Gerard asks the French governement for clear instructions in a cable found in the archives of an adviser to President François Mitterrand, the incumbent at the time.

"We have no other choice... but to arrest them or place them immediately under house arrest to wait for international judicial authorities to decide their case," Gerard wrote, in excerpts of the cable first published on Sunday by Mediapart, a French investigative website.

The French foreign ministry officials then tells Gerard in response "You can... use all indirect channels, especially your African contacts, without exposing yourself directly, to transmit to these authorities our wish that they leave the Humanitarian Safe Zone."

"You will note in particular that the international community, and in particular the United Nations, will determine very soon how to proceed with these so-called authorities," it continued, referring to the former Hutu regime who had sought refuge in southwest Rwanda near the border with what was then Zaire.

According to the UN, about 800,000 people, mostly from the Tutsi minority, were killed in three months.

The massacres were carried out by the Hutus after the assasination of the then Rwandan president Juvenal Habyarimana on April 6, 1994 in a plane crash.

This document that now exposes the inaction or decision of the French authorities to let the suspects escape, comes from unexplored archives to which researcher François Graner was able to gain access after a long legal battle.

"French authorities has let the perpetrators of the genocide leave without arresting them even though the UN had not ruled on their case. Instead of keeping them at the disposal of international justice, they left the zone controlled by the French army, knowing fullw well that they were the organizers of the Tutsi genocide." -François Graner, researcher and member of "Survie" association explains.

Francois explains further that "the whole world was watching at that time, so it was obviously not acceptable at all to say that impunity was being granted to the genocidaires. It is in the continuity of the French support to this regime. The French authorities were not genociders themselves, but they had relied on allies to maintain their influence there."

The judicial inquiry into the UN backed and French led Operation Turquoise, accused by survivors of having knowingly abandoned hundreds of Tutsis in the west of the country, has still not been decided by the judges.

In 2019, current French President Emmanuel Macron announced the creation of an expert panel of historians and researchers to look into the claims and more in France's troubled past in Africa. 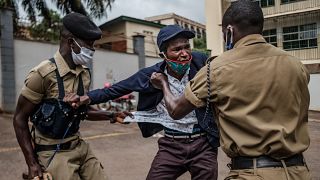