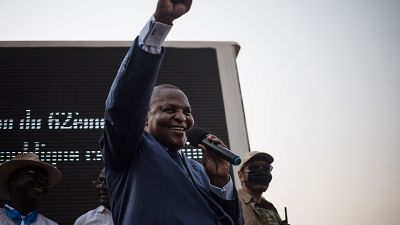 The Central African Republic President Faustin-Archange Touadera officially begun a second term in office on Tuesday January 19 but it is one that is already mirred in huge controversy and conflict.

President Faustin-Archange Touadera's election victory which was confirmed on Monday January 18, by the country's Constitutional Court has been rejected once again by the opposition.

The parties known as the Coalition of the Democratic Opposition (COD-2020) reaffirmed their position on Tuesday saying in a statement they" do not recognize the re-election" of Touadéra "declared winner with only 17% of the electorate".

The group also denounced "countless frauds and irregularities" it said plagued the election and as such the results do not represent the will of the people of the CAR.

The legitimacy of the re-elected president is questioned by the low turnout: just over 35% according to the Constitutional Court's figures. Two out of three registered voters were unable to cast their ballots in the presidential and legislative elections due to insecurity.

The most powerful armed groups in the country, which controls two-thirds of the territory, launched a new offensive a week before the polls.

Opposition candidates had filed several appeals with the Constitutional Court to challenge the results. The court did cancel or correct the results of some polling stations for irregularities, but ruled on Monday that "given the magnitude of the discrepancy of votes", their impact "could not reverse the results.

Meanwhile the security situation in the country continues to deterioriote.

On Monday the UN said two of its peacekeepers were killed after their convoy was ambushed by members of the UPC and anti-Balaka armed groups in the southern are of the Central African Republic (CAR).

Secretary-General António Guterres issued a statement on Tuesday expressing his deep condolences to the families of the peacekeepers, and to the people and Governments of Gabon and Morocco, the home nations of the fallen blue helmets.

The UN chief reiterated his grave concern over the escalation of violence in the CAR and called on the parties involved to immediately cease hostilities and engage in dialogue so as to "advance the political process, preserve fragile gains and fulfil the country’s aspiration for lasting peace."

At least 100,000 people have fled their homes in the country as a rebel coalition calling for the resignation of the president launches attacks, most of which have been foiled by a combined operation of UN peacekeepers and government soldiers.

But the situation has thrown into jeapardy two years of relative peace in a country that was wracked by a brutal five year civil war that started in 2013.