HBO documentary '40 years a prisoner' revisits Philadelphia in 1978 when the black liberation group Move was involved in an epic police siege and shootout.

A police officer was killed in the shootout for which nine Move members were convicted and sentenced to 30 years to life.

The Philadelphia police said they received complaints from neighbors, under orders from mayor Frank Rizzo, who ordered the group to vacate. But the situation escalated into violence.

The story documents the past event and follows Mike Africa Jr, whose parents were arrested in the raid and how he tried to free them.

"The story captures the deep-seated racism and issues in the city of Philadelphia that we can see, that we can really begin to make some changes on," said Africa.

"'40 Years a Prisoner' captures the human-ness of us, of who we are, and it shows who we are versus the image that we've been portrayed as. And that is the element that I think is so valuable in it, because people get to see us for us, who we are and how we interact with each other, the love we share with each other."

The film shows the shocking footage of one of the Move members, Delbert Africa, is beaten by three police officers while he is unarmed, showing how police brutality and systematic racism ensues to this day.

Director Tommy Oliver finished editing the movie in June, just days after George Floyd was killed under the knee of a police officer in Minneapolis.

"It's a cautionary tale in a big way, because when we forget our history, we're doomed to repeat it. And this was something that, like you said, you didn't know about it, your parents barely knew about it," said Oliver

"And here we are fighting for the same thing some 40 years later, fighting against police brutality, wrongful incarceration, systemic racism, abuse of power."

The siege ranks as one of the most violent clashes of the black liberation struggle involving Move and the Black Panthers in the late 1960s and 1970s.

But systemic racism and police brutality are not the only themes of the film.

It also ends on a somewhat upbeat note with his parents released 40 years later and the film captures the first hug between mother and son. 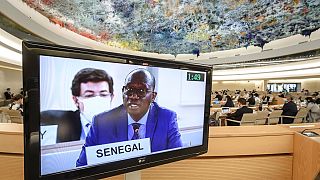