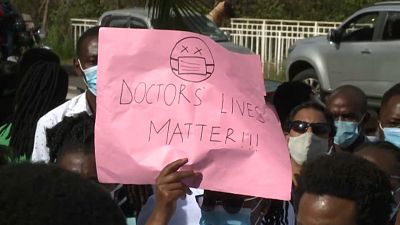 Health workers in Kenya protested on Wednesday over poor working conditions during the coronavirus pandemic, which they say have caused the death of colleagues.

"Our health system has collapsed, if we do not take a collective responsibility, then I do not know that in the next five or ten years what will be doing as a country, " said doctor John Anyul in Nairobi.

The demonstrators also held a vigil outside the Health Ministry in Nairobi, paying tribute to the young doctor Stepehen Mogusu, who died on Monday after contracting the virus.

The 28-year-old father of one reportedly had no health insurance.

Mogusu was employed on a temporary contract and was reportedly not paid for the five months he worked in a COVID-19 ward at a public hospital in the town of Machakos.

Mogusu told Kenya's Nation newspaper after falling ill that he could not afford diapers for his 5-month old daughter.

Before his death, he wrote a letter to fellow medics in which he told them to “ get out while you can with your health or life intact".

The Kenya Medical Practitioners and Dentists Union estimates up to 40 healthcare workers have succumbed to the virus while working on the frontline.

"We need our government, we need everyone to be aware that we make sacrifices in our line of duty, and we do not mind it because we took an oath," said Morgan, a doctor at the protest who did not give his surname.

"But it's important that we be protected, adequate protective equipment, and adequate healthcare cover," said Morgan, a doctor who did not give his surname.

More than 88,000 people have contracted the virus since the first case was reported in March and just over 1,500 have lost their lives. 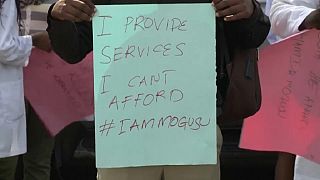 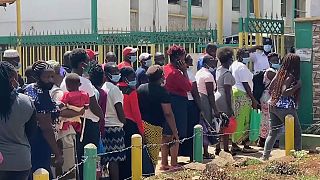