South Africa's President Cyril Ramaphosa on Thursday announced new localized restrictions to stem a resurgence of Covid-19 in the south of the country, amid growing fears new infections could spiral into a second wave.

Authorities in Africa's worst virus-hit country have grown increasingly concerned by cluster outbreaks in the Eastern Cape and Western Cape provinces that flared up last month.

Experts fear the uptick could spread further during the upcoming summer holiday when citizens criss-cross provinces to spend Christmas and New Year with family and friends.

"We have always known that a second wave of infections is possible in South Africa if we do not take necessary measures," Ramaphosa said in an address to the nation on Thursday, noting that "this virus does not take a holiday".

Most of the resurge is driven by infections in the Eastern Cape, particularly in the Nelson Mandela Bay (NMB) municipality, home to the province's largest city of Port Elizabeth.

Ramaphosa said the area had now been declared a "hotspot" and subjected to a new set of restrictions.

A stricter 10:00 pm curfew will be imposed - compared to the midnight cut-off time in the rest of the country.

Alcohol sales and consumption will once again be limited to reduce trauma admissions to busy hospitals, and social gatherings capped.

Ramaphosa assured the new measures were not meant to "punish" NMB residents but to "contain the spread of the virus" and "save lives".

He said officials would soon be visiting two other cluster outbreak areas to determine an "appropriate course of action".

"We need to quickly extinguish the flare-ups before they turn into an inferno," he added.

A total of 800,872 people are confirmed to have been infected by the virus in South Africa since March. Around 92 per cent of these people have recovered. This is good news.

The president also stressed the importance of keeping the economy open after months of stifling movement restrictions.

He urged citizens not to drop their guard and continue adhering to the health rules, such as wearing face masks and respecting curfew times.

South Africa has recorded just over 800,000 coronavirus infections - more than a third of the cases reported across the African continent - and over 20,000 deaths. 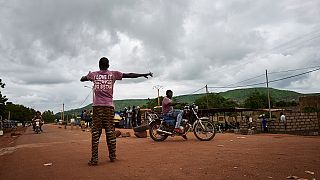