The latest in a string of demonstrations since a whites-only year-end dance party was held in October on school grounds, the activists marched in protest of alleged racism.

The racially-charged clash saw South African President Cyril Ramaphosa call for a probe into the incident which he described as "deeply regrettable” — as although the white supremacist oppressive regime of apartheid ended on paper in the early 1990s, its lingering effects still see both racially unequal institutional challenges and racially-motivated social division in the country 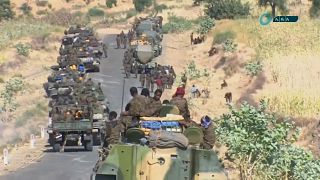