Burundi pays last respect to Nkurunziza ahead of June 26 burial 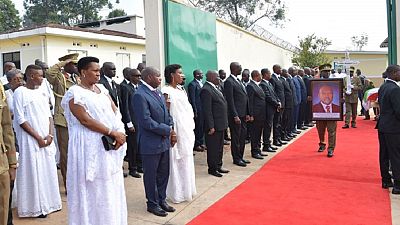 June 26: Nkurunziza to be buried today

There is a solemn, somber mood in the capital and other parts of the country as the man who led the country for the last 15 years is given his final send-off.

Government has urged the public to line up along the road from Karusi hospital where he died, to Gitega stadium, for the last honours. Photos shared by the presidency, Ntare Rushatsi House, showed the presidential couple and widow Denise Bucumi present at the hospital when the remains of Nkurunziza was collected.

The burial comes 18 days after government reported the death of the 55-year-old from “cardiac arrest.” At the time, he was preparing to hand over power to Evariste Ndayishimiye who won elections in May.

The funeral is taking place at the stade Ingoma where the swearing in of Ndayishimiye took place on June 18. The investiture was pushed forward to this month due to the death and going by a Constitutional Court directive.

Burundi has a new president in the person of Evariste Ndayishimiye who won May 20 elections as the country entered the post-Nkurunziza era.

Ndayimishiye was originally supposed to take over in August but the Constitutional Court ruled that the investiture be brought forward following the death of outgoing Nkurunziza.

The event took place at the state Ingoma in Gitega, the political capital of the country. The venue was packed as the president took his oath and went through the motions of accepting his official instruments of office.

The presidency, Ntare Rushtashi House, has been streaming the event on its YouTube Page. The event was largely attended by diplomats given the restrictions on travel due to the COVID-19 pandemic.

Mr Ndayishimiye, a father of six, is known as a practising roman catholic, who also embraces the ideology of his predecessor of “emphasising on God” in politics. The new president is taking over a country that is diplomatically isolated and which no good relations with donors.

His predecessor was accused of presiding over a government that carried out grave human rights violations and a crackdown on the opposition, journalists and activists. He also downplayed the coronavirus pandemic, a BBC report added.

Burundi will swear in president-elect Evariste Ndayishimiye on Thursday, June 18; the AFP news agency reports citing an official source. The development comes a week since the death of outgoing Pierre Nkurunziza.

The Ministry of Foreign Affairs in a note verbale invited heads of diplomatic missions to the event which is slated for the stade Ingoma in the capital, Gitega.

Ndayishimiye was originally supposed to be invested in August after winning May 20 polls which the opposition unsuccessfully contested in court.

The death of Nkurunziza created a vacuum which experts expected the speaker of the national assembly to occupy by cabinet last week ,sought judicial direction on the vacuum. The Constitutional Court ruled late last week that the president-elect be sworn in as soon as possible.

UPDATE #Burundi: The ministry of foreign affairs invites the heads of diplomatic missions to attend the swearing in ceremony of Evariste Ndayishimiye on June 18th, 2020. https://t.co/1Ewvzerz8G pic.twitter.com/J0jaMEEe7J

Burundi’s president-elect Evariste Ndayishimiye today visited the presidency where he signed a book of condolence opened for the late president Pierre Nkurunziza.

He arrived at Ntare House along with his wife and an entourage, signing the book of condolence opened since Wednesday before delivering an address in which he eulogized his predecessor.

The Constitutional Court directed on Friday that there was no need for an interim president and that as president-elect, Ndayishimiye should be sworn in as soon as possible. There has not been any dates announced by government yet.

Cabinet, led by first VP Gaston Sindimwo, had sought interpretation of relevant transition laws at a time when most analysts said National Assembly speaker Pascal Nyabenda was expected to be sworn in till the investiture in August of the president-elect.

June 12: Burundi court rules president-elect should be sworn in

Cabinet, led by the First Vice President, at an extraordinary session on Thursday referred transition issues to the court seeking interpretation of relevant laws.

The vacuum at the presidency was occasioned by the death on Monday of Pierre Nkurunziza, who had been president since 2005 and was due to hand over to Ndayishimiye in August.

Experts said the speaker of parliament, Pascal Nyabenda, should have been appointed acting president – which situation did not take place.

Ndayishimiye, run on the ticket of the ruling CNDD-FDD party, winning the May presidential election. The opposition unsuccessfully contested the vote which they insist was tainted but the Constitutional Court rejected their petition.

ALERT ⭕️ #Burundi constitutional court rules that there will be no interim president, the president-elect GeneralNeva shall be sworn in as soon as possible.

But will he be able to form a government without a new senate? pic.twitter.com/D6MKE5Ho7s

Burundi’s cabinet issued a statement after an extraordinary session to discuss the way forward in a post-Nkurunziza era. The statement signed by Prosper Ntahorwamiye, government spokesperson, addressed constitutional issues relative to transfer of executive authority.

It stated that the cabinet was seeking constitutional directives from the constitutional court arguing the need for the two vice-presidents to take interim charge till a substantive president is sworn into office.

In the other matters section of the release, government announced a suspension of all irreligious music in public places during the period of mourning for the former president. A seven-day national mourning was announced on June 9, a day after the death occured.

The government statement said music in bars, nightclubs and karaoke sessions were suspended. Mayor of the commercial capital, Bujumbura, Freddy Mbonimpa in a separate statement confirmed the ban but clarified that gospel music was allowed.

A position that governor of the capital, Gitega, Venant Manirambona also echoed. In Bujumbura leisure activities were suspended during the mourning period. Only wedding parties, funerals and mourning wakes are allowed, he said.

Burundi will seek constitutional interpretation on how to proceed over the power vacuum created by the death of president Pierre Nkurunziza on June 8.

The First Vice-President, Gaston Sindimwo, today (June 11) chaired an extraordinary Council of Ministers – cabinet – meeting which agreed to refer the issue to the apex court.

Cabinet wants the court “to declare the vacancy of the post of President of the Republic following the death of Pierre Nkurunziza,” a tweet by the VP’s office said. The country is observing a one-week national mourning period.

The vacancy will pave the way for the appointment of a replacement for the former president. Nkurunziza was due to handover power in August to Evariste Ndayishimiye who won May 2020 elections.

Reports after the demise of Nkurunziza suggested that the Head of National Assembly, Pascal Nyabenda, was expected to play the acting role till the investiture of Ndayishimiye. Meanwhile, more dignitaries continue to troop to the state house to sign a book of condolence opened since Tuesday.

Among those that have signed the book are wife of the president-elect but Ndayishimiye himself have yet to do so. Denise Nkurunziza, wife of the former president, also returned from Kenya yesterday where she had been seeking treatment for an undisclosed medical condition.

In the issuance of condolences to the government, Chad for instance addressed its official message to Vice-President Simdimwo whiles the Botswana president addressed his message to Pascal Nyabenda referring to him as President of National Assembly and Acting President of Burundi.

US statement: On the Passing of Burundian President Pierre Nkurunziza

The United States extends its condolences to those mourning the loss of Burundian President Pierre Nkurunziza. We remain a committed partner and friend to the Burundian people.

Following a peaceful transition to President-elect Evariste Ndayishimiye, we look forward to working with him and the new government. We reaffirm our support for Burundi’s aspirations for a more democratic, prosperous, peaceful future.