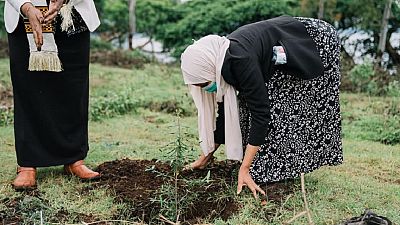 The PM’s Green Legacy initiative, kicked off recently with Addis Ababa residents planting trees ahead of the country’s rainy season. The project aims to tackle the effects of deforestation and climate change in the drought-prone country.

Bethlehem Wondimu, a resident of the capital stressed the importance of the project: “Trees alter the environment we live in by moderating the climate, improving air quality and it’s also a huge benefit for our health as well. So I support this initiative by Prime Minister Abiy Ahmed.”

Birhanu Assefa for his part said: “Only planting trees is not enough, we need to cultivate the ones we planted. It’s important to come again and monitor the trees that we planted today.”

Ethiopia has reportedly lost nearly 97 percent of its native forests due to a growing population and an increased need for land for food production.

The government hopes to plant 20 billion trees over four years. Four billion trees were reportedly planted during the entire 2019 rainy season, which runs from June to September.