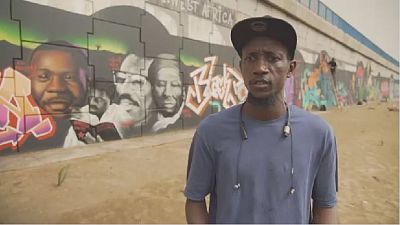 In the heart of Dakar, the Senegalese capital, a dozen artists have put the finishing touches to a monument that pays tribute to black pride, in support of the Black Lives Matter movement.

Motorists passing through the capital can now see 80 metres of the faces of activists and black personalities immortalized on concrete.

King Mow real name Mohamed Moustapha Souare shares the motivation for his work: “The wall, it makes the history of the African people. Here in Africa, in Europe, in the United States, and all over the world.

We represented Winnie Mandela, who fought in South Africa to really end apartheid. Malcolm X, Mame Cheikh Ibrahima Fall on a religious and cultural level, who also contributed a lot to forge this Senegalese youth.

However, the portrait of George Floyd is seen nowhere. “We didn’t want to just paint a wall to say ‘rest in peace George Floyd’. We wanted to send a strong message to the whole African nation, whether it’s here in Africa, whether it’s outside of Africa,” Serigne Mansour Fall, a co-graffitist explained.

King Mow added: “We represented, for example, the Black Panthers who had a really legitimate fight to defend the black people.

“We represented Winnie Mandela, who fought in South Africa to really end apartheid. Malcolm X, Mame Cheikh Ibrahima Fall on a religious and cultural level, who also contributed a lot to forge this Senegalese youth.”

The mural fresco, completed at the cost of hundreds of buckets of acrylic paints, is part of another dynamic more offensive than defensive posturing, explains the artists of the Radikal Bomb Shot (RBS) collective.

A few weeks ago, the collective adorned the streets of the city with several dozen graffiti to raise awareness of the gestures that are barriers to the contraction of covid-19 and to pay tribute to caregivers.

The Senegalese and grassroots African artist say, their works are targeted at present and future generations of young Africans who need to be reminded of the fact that, some blacks sacrificed their lives so others could live with dignity.