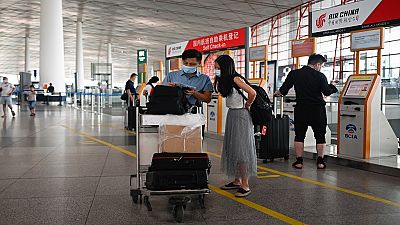 Beijing’s airports cancelled more than 1,200 flights and schools in the Chinese capital were closed again on Wednesday as authorities rushed to contain a new coronavirus outbreak linked to a wholesale food market.

The city reported 31 new cases on Wednesday while officials urged residents not to leave Beijing, with fears growing about a second wave of infections in China, which had largely brought its outbreak under control.

Tens of thousands of people linked to the new Beijing virus cluster — believed to have started in the sprawling Xinfadi wholesale food market — are being tested, with almost 30 residential compounds in the city now under lockdown.

At least 1,255 scheduled flights were cancelled Wednesday morning, state-run People’s Daily reported, nearly 70 percent of all trips to and from Beijing’s main airports.

The outbreak had already forced authorities to announce a travel ban for residents of “medium- or high-risk” areas of the city, while requiring other residents to take nucleic acid tests in order to leave Beijing.

Meanwhile, several provinces were quarantining travellers from Beijing, where all schools — which had mostly reopened — have been ordered to close again and return to online classes.

Officials have closed 11 markets and disinfected thousands of food and beverage businesses in Beijing after the outbreak was detected.

The city has now reported 137 infections over the last six days, with six new asymptomatic cases and three suspected cases on Wednesday, according to the municipal health commission.

An additional two domestic cases, one in neighbouring Hebei province and another in Zhejiang, were reported by national authorities on Wednesday, while there were 11 imported cases.

Authorities have so far banned group sports, ordered people to wear masks in crowded enclosed spaces, and suspended inter-provincial group tours in response to the outbreak.

Officials said that since May 30, more than 200,000 people had visited Xinfadi market, which supplies more than 70 percent of Beijing’s fruit and vegetables.

More than 8,000 workers there were tested and quarantined.

Until the new outbreak, most of China’s recent cases were nationals returning from abroad as COVID-19 spread globally, and the government had all but declared victory against the disease.

China’s Center for Disease Control and Prevention said Monday that the virus type found in the Beijing outbreak was a “major epidemic strain” in Europe.