Burundi’s President Pierre Nkurunziza died of a heart attack, according to a government statement released June 9, a day after he passed away in a local hospital. He was 55 years.

He had been in power since 2005 and was due to be replaced in August by president-elect Evariste Ndayishimiye, who won the May 20 presidential election.

In this article we take a look at major developments since the death was announced – from presidential condolences to the next steps to be taken for a transition to the post-Nkurunziza era.

Government declared a week of mourning following the passing of the president. Announcing the national morning, Nkurunziza’s senior adviser said he was “very much saddened” by his boss’ “untimely death.”

He weighed in on rumours of the cause of death stressing the government disclosure that the President of the Republic and Supreme Guide of Patriotism was “a victim of cardiac arrest.”

With the exit, the Speaker of Burundi’s parliament Pascal Nyabenda is in pole position to take over as interim president till a new president is officially sworn-in, Reuters news agency reported on Tuesday.

A group opposed to the government said the swearing in of the speaker is consistent with the country’s laws.

As of today (June 10) ambassadors and other officials are signing a book of condolence at the Ntare Rushatsi House, the presidential palace located northeast of the former capital Bujumbura.

Ten facts about the late president and his time in office

1. Rose to power ate the end of 12-year civil war
2. A former rebel leader whose first mandate was given to him by parliament in 2005.
3. He won re-election in 2010 but a third-term bid in 2015 spared unrest.
4. In 2018 referendum allowed him to possibly extend rule till 2034 but he announced retirement.
5. Survived a 2015 coup attempt when former army loyalist Godefroid Niyombare led the attempt to overthrow him.
6. Under his regime, Burundi made history by becoming the first African nation to quit the International Criminal Court in 2017.
7. In 2019, the country forced the United Nations Human Rights office to close after 23 years.
8. Ahead of the May 2020 elections, the WHO representative and three experts were also expelled.
9. Opposition, media and other opponents routinely reported mass rights abuses including killings, arbitrary arrests and detentions and forced disappearances.
10. Burundi’s refugee figures, especially in neighbouring Tanzania was estimated at over 200,000.

The Hutu CNDD-FDD rebel group that Mr Nkurunziza led during the civil war metamorphosed into the current ruling party. The civil war was sparked by the killing of President Melchoir Ndadaye in 1993.

The youth wing of the CNDD-FDD has routinely been accused of gross rights abuses from killings, enforced disappearances, rape, torture and even ambushes along major roads, killing many travellers.

Nkurunziza originally took up arms in a bid to end the long-standing dominance of the country by the minority Tutsi community. He was sentenced to death in absentia by a Burundian court in 1998 for laying land mines, but received an amnesty under the peace accord that ended the fighting. 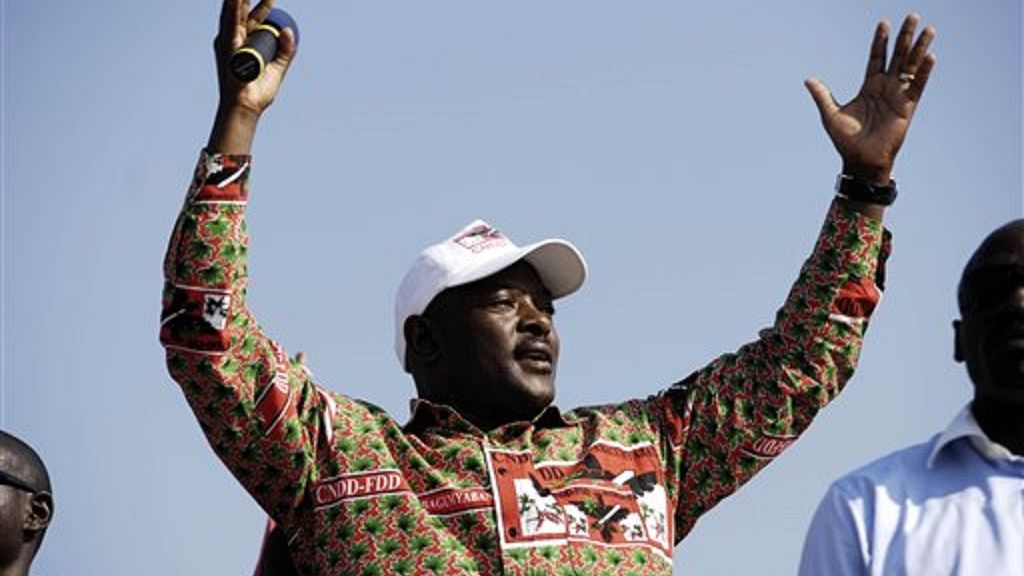 In this Thursday June 24, 2010 photo Pierre Nkurunziza, current president of Burundi and of the ruling CNDD-FDD Party, gestures to supporters during his election campaign at Gatumba , 20km outside of the capital of Burundi, Bujumbura. 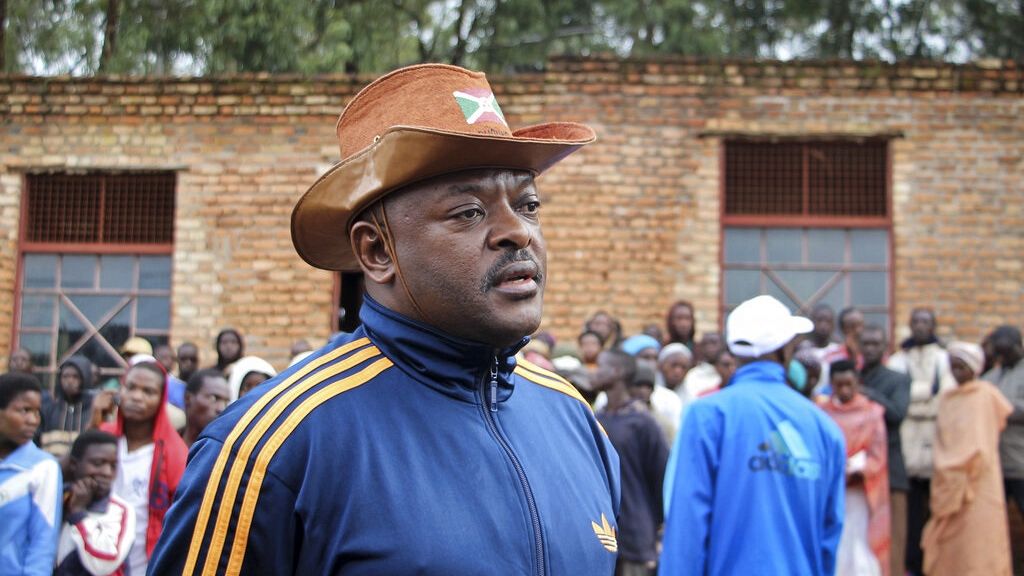 Burundi’s President Pierre Nkurunziza speaks to the media after casting his vote in the constitutional referendum in Buye, north of Ngozi, in northern Burundi Thursday, May 17, 2018. 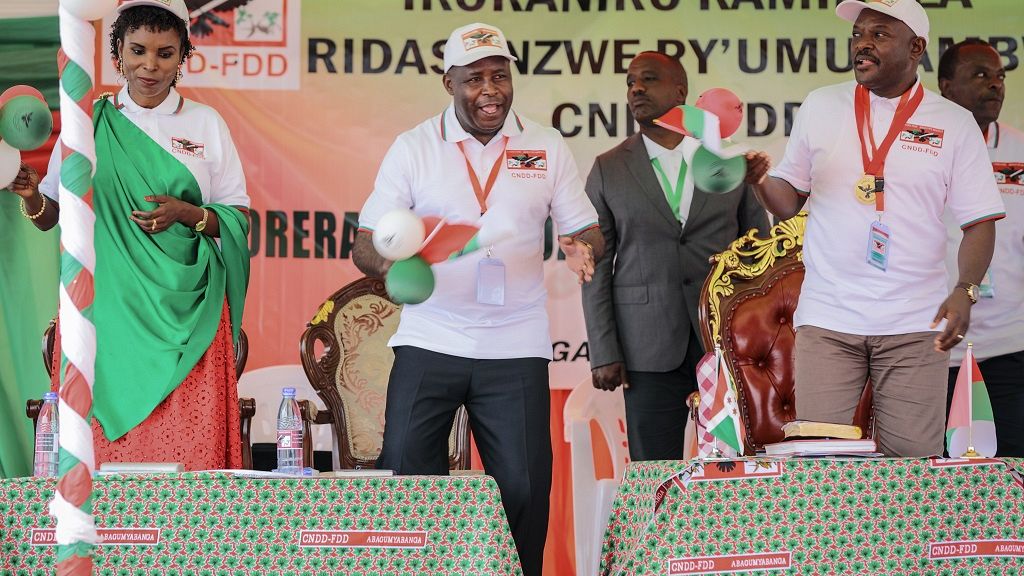 Burundi Army Gen. Evariste Ndayishimiye, center, is accompanied by his wife Angeline Ndayubaha, left, and current president Pierre Nkurunziza, right, after he was chosen as the party’s presidential candidate at a national conference for the ruling CNDD-FDD party in the rural province of Gitega, Burundi Sunday, Jan. 26, 2020. 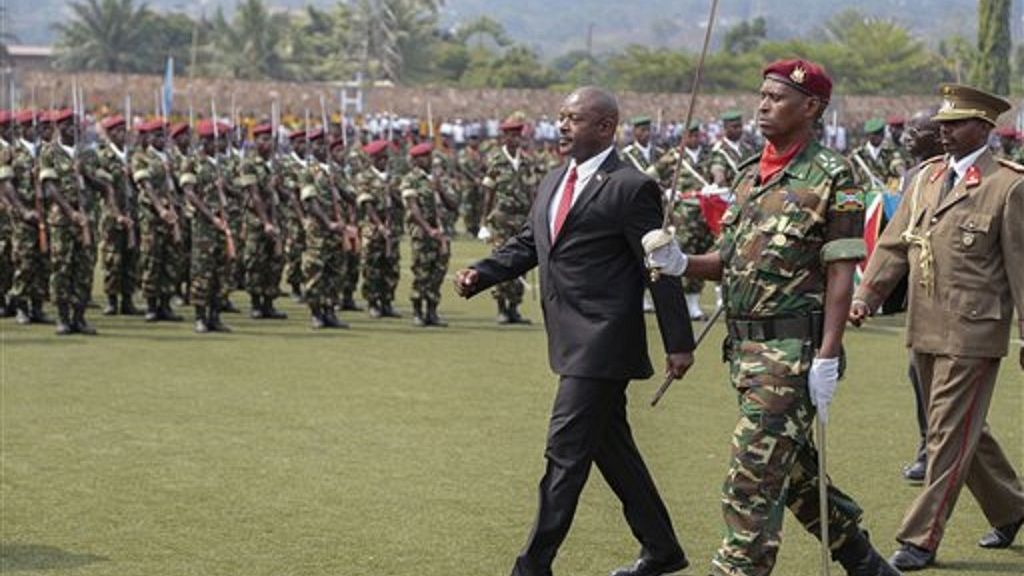 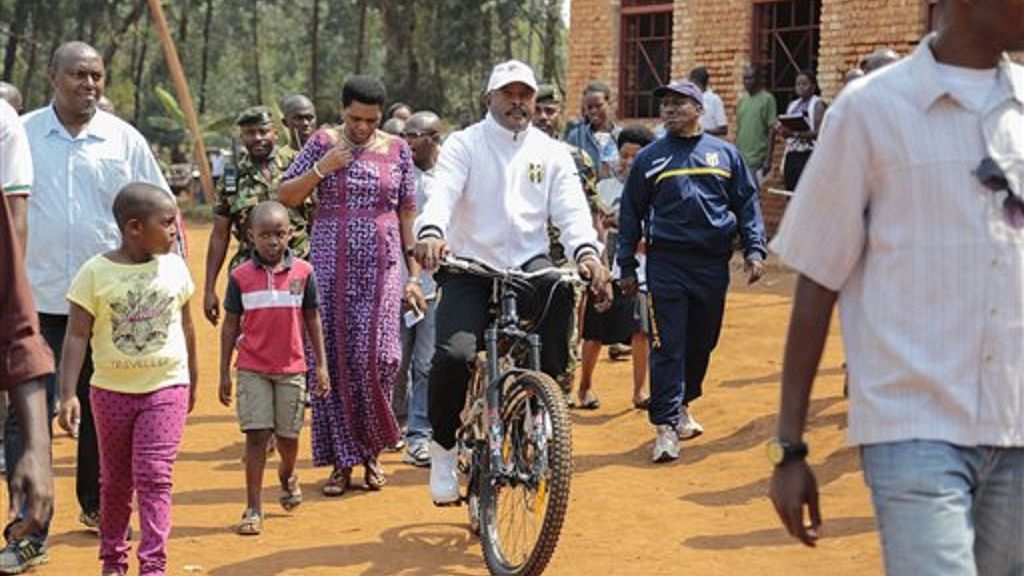 Burundian President Pierre Nkurunziza, rides a bicycle as he arrives to vote in parliamentary elections in Ngozi, Burundi, Monday, June 29, 2015. 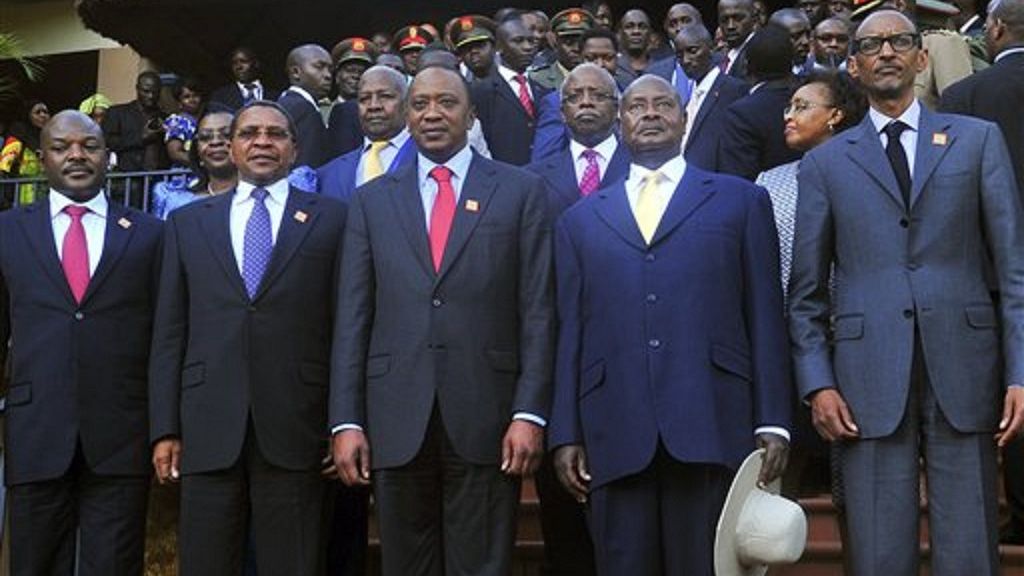 East African Presidents, from left to right, Pierre Nkurunziza of Burundi, Jakaya Kikwete of Tanzania, Uhuru Kenyatta of Kenya, Yoweri Museveni of Uganda and Paul Kagame of Rwanda pose for a group photograph in Munyonyo, near Kampala, in Uganda, Saturday, Nov. 30, 2013.

Across the East African region through to the southern and West African region, leaders have expressed public condolences to the family of the late president and to the government and people of Burundi.

Most of the messages extol virtues of the former Burundian leader. Aside presidents and Prime Ministers, former presidents and other top government officials across the continent also expressed their condolences.

Kenya’s Uhuru Kenyatta for instance said Nkurunziz was: “an outstanding regional counterpart who served his country with distinction as Head of State and Government, and worked tirelessly for the peace and stability of his country and the Great Lakes Region.

He added: “death had robbed East Africa of a prominent leader whose contribution to the integration and progress of the region shall be sorely missed.”

I would like to express my condolences on the sudden passing of President #PierreNkurunziza Deepest sympathies to his family and the people of #Burundi.

On behalf of Gov't and my own behalf I sent our condolences to the Gov't and People of Burundi for the passing of President Nkurunziza. This also goes to the family of the President.
God Bless!

My deepest condolences to the BurundiGov and the people of #Burundi following the death of HE President Pierre Nkurunziza. My thoughts and prayers go out to his family and loved ones.

H.E M_Farmaajo: I send my heartfelt condolences to the Government and the people of the Republic of #Burundi. On behalf of the citizens of the Federal Republic of Somalia and myself, we mourn the passing of H.E President pnkurunziza for he was indeed a great friend of #Somalia. https://t.co/VwdIeyBrta

Chairperson of the African Union, His Excellency President CyrilRamaphosa of the Republic of South Africa, has expressed his sadness at the untimely passing of Burundian President, His Excellency Pierre Nkurunziza. pic.twitter.com/Su9hJVpNyX