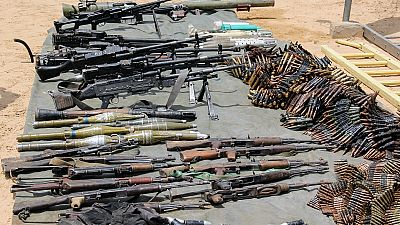 Jihadist groups have carried out several attacks in northeastern Nigeria ahead of Eid al-Fitr, which marks the end of Ramadan for Muslims, according to corroborating sources.

On Monday night, fighters from the Islamic State in West Africa (ISWAP) invaded the city of Dapchi, Yobe State, provoking fighting with the army that left one soldier dead and three wounded, and five insurgents dead.

The jihadists looted shops and the house of a traditional chief before the intervention of soldiers and hunters from self-defense groups, two military sources and local residents told AFP.

“They arrived around 5:30pm and went on for more than four hours before the soldiers came to fight them,” said Bashir Manzo, a resident of Dapchi.

There were no civilian casualties, according to these different sources.

Dapchi was the scene of the abduction of more than 100 schoolgirls by ISWAP in February 2018. The hostages were later released following negotiations with the government, except for a Christian woman who is still being held for refusing to renounce her faith.

Also on Monday, two female suicide bombers blew themselves up at around 19:30 GMT in the town of Konduga, in the neighbouring state of Borno, killing two people in the home of a militiaman engaged in the anti-Jihadist struggle.

“Our colleague was targeted. The impact of the explosion destroyed part of a nearby house, killing him and an old man,” local militia leader Ali Hassan told AFP.

This attack is characteristic of the Boko Haram group, with which ISWAP split off in 2016, which regularly uses suicide bombers to target civilians.

Konduga is located in the Sambisa forest, a stronghold of Boko Haram from which suicide bombers have often launched their attacks in the past.

ISWAP, on the other hand, is known to target mainly army positions. In March, its men killed more than 70 soldiers in an ambush at Gorgi, near Konduga.

On Sunday, 20 civilians were killed by rocket fire attributed to Boko Haram during an attack on the village of Gajiganna, 50 km from the Borno capital, Maiduguri.

“It has become a pattern every year for insurgents to step up attacks near Eid to sabotage the celebrations,” said the head of the anti-Jihadist militia in Borno, Babakura Kolo, saying this year “will be no different.