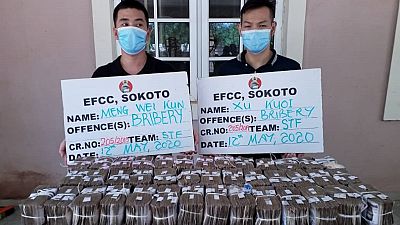 Nigeria’s anti-corruption agency, the Economic and Financial Crimes Commission, EFCC; reported the arrest of two Chinese businessmen who attempted to bribe an official to cover up corrupt deals.

The EFCC via its social media handles said the arrest had been effected on Monday at its Zonal Office in northwestern Sokoto State although the said corruption took place in neighbouring Zamfara State and involved the former state government.

Mr. Meng Wei Kun and Mr. Xu Koi were arrested for offering a sum of fifty million Naira (equivalent to $250,000) as bribe to its EFCC Zonal Head, Mr. Abdullahi Lawal.

“The bribe was allegedly offered in a desperate bid to compromise ongoing investigations of a construction company, China Zhonghao Nig. Ltd, handling contracts awarded by the Zamfara State Government in the sum of N50,000,000,000 (Fifty billion Naira) between 2012 to 2019.”

The EFCC said it was investigation the company with respect to roads and water contracts in Zamfara. It turned out that the amount was the first-part of an agreed upon hundred million Naira bribe to “bury” the matter.

“In a grand design to trap the corrupt officials, Lawal played along, and on Monday, two representatives of the company Meng Wei Kun and Xu Kuoi offered him cash totalling fifty million naira in their office along airport road, Sokoto,” the statement added.

Photos attached to the press release showed the bribe sum which were carted in mineral water boxes, displayed on a table whiles the two suspects, wearing masks, held identification notices that listed their offence as bribery.

The EFCC added that the suspects will soon be charged to court. Neither the company nor the Chinese Embassy in Nigeria have reacted to the news. Chinese companies have extensive interests in Nigeria especially in the area of infrastructure execution.