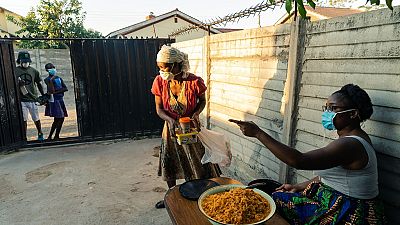 In some households, hunger is more devastating than the coronavirus. In Zimbabwe, in particular, containment measures prevent many day-to-day workers from earning their daily bread.

For the past 19 days, Samantha Murozoki, an immigration lawyer, has been helping the most vulnerable residents of her neighbourhood in Chitungwiza.

“I used about $200 in cash and after we ran out of money, I started bartering. I had things I had at home, sneakers, jeans, whether we were trading for a packet of corn or cooking oil, to have things to cook for the day as the number of people increased”, Samantha said.

I used about $200 in cash and after we ran out of money, I started bartering.

What started as a small initiative in her neighbourhood has attracted many people from neighbouring vicinities.

“I used to go to South Africa to buy things like cooking oil, baby nappies and blankets to sell here in Zimbabwe, but now, as the borders have been closed, we can’t get through. Even the places where we used to do business from here have been destroyed’‘, a beneficiary, Diana Madondo.

Another recipient James Tavhiringwa, said ‘’ Alot of people who got suspended from work because of the coronavirus. So if you don’t work, there’s no other way to make a living, there’s no money, so the food in your house is going to run out, obviously, and this program has been beneficial to us”.

What started as a small initiative in her neighbourhood has attracted many people from neighbouring vicinities. Since April 15, Samantha has served over 4,600 meals.

Last week, she received 500 kg of flour, 20 kg of beans and sugar and 10 kg of salt from a national wholesaler to support her initiative.