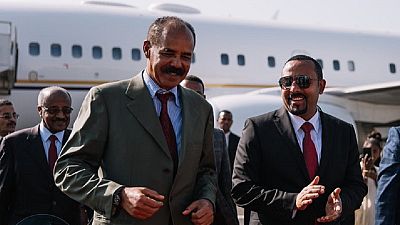 May 4: Dam inauguration in Oromia

The Batu Dugda irrigation project currently has a capacity of developing 2,000 hectares of land with a potential to develop 15,000 hectares up on the completion of its expansion works, state-run FBC reported.

The Eritrean president had a relatively busy first day on his trip to Ethiopia. According to Information Minister Yemane Meskel, he was received at the Bole International Airport by PM Abiy following which they discussed bilateral and regional issue.

“President Sahle-work hosted luncheon for the President and his delegation,” the Minister added in a tweet. The event was held at a public restaurant in the capital.

Former Ethiopian PM Hailemariam Desalegn, and President of the Oromia Region, Shimeles Abdissa, attended the luncheon after which Afwerki and his delegation also visited some sites in Addis Ababa.

It was a renewed pleasure to join our PM AbiyAhmedAli in welcoming President Isaias Afeworki who is on a two-day visit to Ethiopia. We hosted him in the stunning park coming up on Entoto mountain, a truly amazing place to relax and unwind. pic.twitter.com/K2DVIgiS73

According to the Eritrean information minister, the president’s trip bordered on three areas: bilateral ties, the fight against COVID-19 and locust infestation as well as regional matters.

Accompanying the president are the Foreign Minister Osman Saleh and presidential advisor Yemane Ghebreab. Visits between the two neighbours have been regular in the past few years after a historic thawing of relations in 2018.

Bilateral relations have grown over the past two years even though analysts have asked that efforts at consolidation must be further strengthened. Relations boosters include resumption of flights, reopening of embassies, reestablishing of telephone lines amongst others.

On the subject of reopening of border crossings, they were held to much fanfare in 2018 and 2019 but have since been unilaterally closed by Eritrea. The handing over of the contentious town of Badme and demilitarization of the borders remain outstanding.

With respect to COVID-19, the two countries have relatively low infection rates in the East, Horn of Africa region. Whiles Ethiopia is leading calls for international debt relief and championing virus aid efforts, Eritrea is raising funds – home and abroad – from nationals to combat the pandemic.

The East Africa locust invasion has also impacted parts of the two countries as well as Djibouti, Somalia, Kenya, Uganda and Tanzania.

Afwerki and Abiy have exchanged bilateral visits since then, with the mooting of the idea of a new regional bloc on the cards. The two leaders along with the Somali counterpart Mohammed Abdullahi Farmaajo have also held trilateral summits in Asmara and Bahir Dar in the recent past.