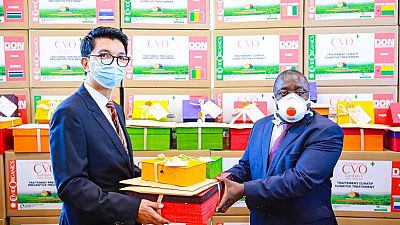 Guinea Bissau received a consignment of Covid-Organics, the Malagasy herbal tea touted as having preventive and curative abilities for COVID-19.

A government delegation returned to Bissau with the medication after receiving the consignment in Antananarivo on May 1. It was received by President Umaro Sissoco Embalo.

The president said at the ceremony: “This donation part of the fight against the global pandemic called COVID-19. I would like to say that with this, Guinea-Bissau will be seen as a different kind of nation.

“It will be seen as a country that still has good people. And today, the world will talk about Guinea-Bissau,” he added.

According to Embalo’s chief of staff, Califa Soares Cassama, 14 other members of the regional ECOWAS bloc are waiting for what many consider to be the “magic COVID-19 mixture.”

During the ceremony in Madagascar, President Rajoelina intimated that the donation was for countries across the region. The tonnage and type of COVID-Organics remains unknown.

The packages received by head of the Guinean delegation were branded with flags of different ECOWAS nations. Rajoelina also thanked Embalo for accepting to distribute the consignment to neighbouring countries. ECOWAS secretariat has yet to speak on the issue.

As of May 3: donations have been officially made to Equatorial Guinea and Guinea-Bissau. Republic of Congo, Tanzania and Comoros have all publicly expressed interest in receiving donations.

President Rajoelina has also spoken to leaders of Senegal, and the Democratic Republic of Congo, with both peers lauding the Malagasy effort.

Meanwhile, the Africa Centers for Disease Control, Africa CDC, last week confirmed that treatment trials are underway across five African countries but did not mention the Malagasy ‘cure.’