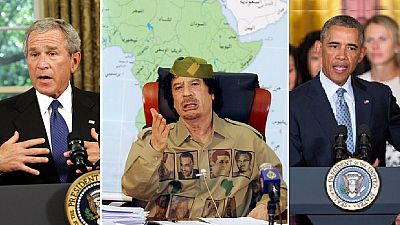 The outbreak of the new coronavirus , COVID-19, at its current pace of movement and impact exposes the fact that the world was not ready for a pandemic. Almost the same measures are being applied across the world – be it in the developed, developing or underdeveloped nations.

A typical example is the widely propagated measure of lockdowns and forcing people to stay at home as medics treat patients and as scientists race to find a vaccine and or medication.

But the pandemic has also coughed up instances where warnings were sounded by two American presidents tasking their health systems to prepare for a pandemic the like of the Spanish flu of January 1918 to December 1920. Then there is a resurgent video of ex-Libyan leader Gaddafi speaking about vaccines.

Fifteen years ago, the American president George Bush read a book on the Spanish influenza which caused him to summon top officials demanding that the country prepares for a pandemic.

The national plan drawn up at the time included among others: diagrams for a global early warning system, funding to develop new, rapid vaccine technology, and a robust national stockpile of critical supplies, such as face masks and ventilators, a former White House official said in an ABC News report.

That plan remained unused and in the face of other national challenges placed on the back burner till COVID-19 arrived. A video clip of Bush speaking at the National Institutes of Health in November 2005 has now resurfaced. A transcript of his comments are below:

Leaders at every level of the government have the responsibility to confront dangers before they appear and engage the American people on the best course of action. It is vital that our national address and discuss the threat of pandemic flu now.

There is no pandemic flu in our country or in the world at this time but if we wait for a pandemic to appear it will be too late to prepare and one day many lives could be needlessly lost because we failed to act today.

By preparing today we can give our citizens some peace of mind knowing that our nation is ready to act at the first sign of danger. And that we have the plans in place to prevent and if necessary withstand and influence the pandemic.

In this speech a long time ago, President George Bush predicted a flu pandemic! They listened (and given the very high infection rates of #COVID19 in USA) they seem to have done little or nothing! The main lesson we learn from history is that we don’t learn from history! pic.twitter.com/NsQHTBkE07

Nine years later another president made a case for preparedness for a pandemic – again the like of the Spanish flu. It was Barack Hussein Obama. Incidentally his call was linked to the Ebola outbreak that hit West Africa in 2014 – 2015.

Some of his comments at the time were: “The funding we are asking for is needed to keep strengthening our capacity here at home sp we van respond to any future Ebola cases. It is needed to help us partner with other countries to prevent and deal with future outbreaks and threats before they become epidemics.

“We were lucky with H1N1 that it did not prove to be more deadly. We can’t say we are lucky with Ebola because obviously it’s having a devastating effect in West Africa but it is not airborne in its transmission.

“They may and likely will come a time in which we have likely both an airborne disease that is deadly. And in order for us to deal with that effectively, we have to put in place an infrastructure – not just here at home but globally – that allows us to see it see it quickly, isolate it quickly, respond to it quickly.

“So that if and when a new strain of flu like the Spanish flu, crops up five years from now, or a decade from now, we’ve made the investment and we are further along to be able to catch it. It is a smart investment for us to make,” he stressed.

Obama warned Americans about preparing for a global pandemic back in 2014 pic.twitter.com/eg7prLamm6

Vaccines and Gaddafi’s final address at the United Nations

Former Libyan leader Muammar Gaddafi is on record to have made one address to the United Nations in 2009 during the world body’s 64th General Assembly in New York. Gaddafi broke protocol by stretching his 15-minute speech to 90 minutes.

The then Chairperson of the African Union – wore a brown traditional Libyan outfit with a black African continent brooch pinned to his chest – he was introduced as the “Leader of the Revolution of the Socialist People’s Libyan Arab Jamahiriya, President of the African Union and King of African Kings.”

His speech touched on a myriad of issues including making a permanent seat for Africa on the United Nations Security Council. But a part of his address that has popped up in recent times is his pronouncements on vaccine. It was shared widely on social media including by a Burundian top government official, Willy Nyamitwe.

“We are addressing the phenomena of piracy and terrorism in the wrong way. Today there is swine flu. Perhaps tomorrow there will be fish flu, because sometimes we produce viruses by controlling them. It is a commercial business. Capitalist companies produce viruses so that they can generate and sell vaccinations.

“The entire world should strive to protect our people, create and manufacture vaccinations and give them free to children and women, and not profit by them. All those items are on the agenda of the General Assembly, which has only to exercise that duty.”

#coronavirus: Muammar Gaddafi's Prophetic Speech on what is happening in the world now… https://t.co/85a0ogJuYP

Below is the full speech in video