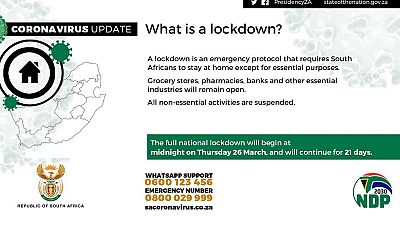 South African president Cyril Ramaphosa has announced a 21-day national lockdown as the country’s coronavirus figures surged on Monday to over 400 from 274 as at Sunday.

According to the president, the measure will start effectively Thursday March 26. He said the move was to help disrupt the rise of the coronavirus which has been rising since the first case was recorded early this month.

“The next few days are crucial. Without decisive action the number of actions will increase. This extremely dangerous for a population like ours. Our fundamental task is to contain the spread of the disease. We must therefore do everything to reduce the overall number of infections.

South Africa is currently Africa’s most impacted by the coronavirus. Ramaphosa said all South Africans will have to remain home: “Individuals will not be allowed to leave their homes except in exceptional circumstances,” he stressed.

The South African National Defence Force have been tasked to join the police to ensure the strict enforcement of the new rules.

The president also outlined a series of economic interventions from the government and with the cooperation of relevant private sector bodies. “We have set up a solidarity fund which focuses on efforts to combat the spread of the virus. The fund will compliment what we are doing in government. The fund will be chaired by Gloria Serobe.

“To alleviate congestion at pay points, grants for pensioners will be available from 30 and 31 March. Any employee who falls ill from exporsure will be compensated through the compensation fund,” he added.

More than half of South Africa’s total cases are in Gauteng province, which includes Johannesburg, the country’s largest city with 5.7 million people, and the capital, Pretoria, with 2.4 million, according to figures released by the government health ministry.