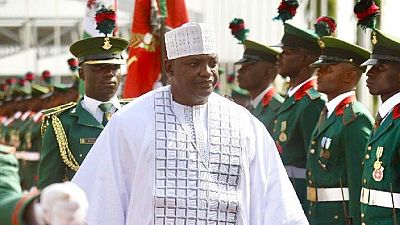 Gambian president Adama Barrow has replaced the head of the army according to a statement from the presidency.

The March 11 statement said Barrow as Commander in Chief of the Armed Forces had “decided to relieve Lietenant General Masanneh Kinteh of his duties as the Chief of Defense Staff of The Gambian Armed Forces effective 5th March, 2020.

“Gen. Kinteh hands over to Deputy Chief of Defense Staff, Major General Yakuba A. Drammeh. The President seizes the opportunity to thank General Kinteh for his service to the nation,” the statement concluded.

Kinteh has been in the Chief of Defence Staff (CDS) since February 2017 replacing Ousmane Badjie, the last CDS under former President Yahya Jammeh. Badjie was redeployed to Foreign Service by President Barrow.

Kinteh had before 2017 served as the CDS between 2009 and 2012. Incidentally, when Jammeh removed him as CDS, he was redeployed to foreign service and served as The Gambia’s Chief of Mission in Havana, Cuba.

Chief of Defence Staff Kinteh relieved of his duties, hands over to his deputy Major General Yakuba Drammeh. pic.twitter.com/ZbNdRw0inc

Badjie made the headlines during the 2016 post-election crisis in the country after exiled Jammeh refused to accept defeat from the December 1, 2016 polls.

Badjie became famous for his pronouncements about loving his troops and that they were not going to fight regional troops deployed to oust Jammeh.