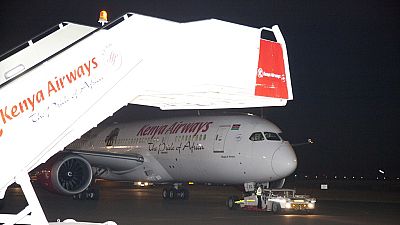 <p>The economic fallout from the coronavirus outbreak for African airlines is only becoming clearer now. For Kenya airways, the losses amount to $8m almost a month since the airline stoppled flying to China.</p> <p>Before the outbreak, Kenya’s flag carrier used to fly to the industrial hub of Guangzhou three times a week. Acting company chief executive Allan Kilavuka told the East African that the losses include foregone passenger and cargo revenue.</p> <p>Meanwhile, the government has since last week banned traffic to and from China over the outbreak. President Uhuru Kenyatta ordered in a directive among others that a task force be formed to coordinate the country’s response.</p> <p>The task force on Tuesday also imposed a ban on flights from northern Italy, specifically from Verona and Milan. It said the measure was because of the spike in cases in the area. </p> <p>Flights from the area are suspended as of March 3rd 2020, a statement read. “This part of Italy is currently experiencing coronavirus incidents which could affect the safety of Kenyans,” the statement added. Kenya’s coastal town of Malindi is popular with Italians, a journalist with South Africa’s <span class="caps">SABC</span> noted on Twitter.</p> <blockquote class="twitter-tweet"><p lang="en" dir="ltr">Kenya to suspend flights from Verona and Milan, Italy over <a href="https://twitter.com/hashtag/Coronavirus?src=hash&ref_src=twsrc%5Etfw">#Coronavirus</a> <a href="https://twitter.com/hashtag/SABCNews?src=hash&ref_src=twsrc%5Etfw">#SABCNews</a> <a href="https://t.co/2fUhl05071">pic.twitter.com/2fUhl05071</a></p>— Sarah Kimani (@sarahkimani) <a href="https://twitter.com/sarahkimani/status/1234867319345754113?ref_src=twsrc%5Etfw">March 3, 2020</a></blockquote> <script async src="https://platform.twitter.com/widgets.js" charset="utf-8"></script> <p>The International Air Travel Association, <span class="caps">IATA</span>, said overall African carriers risked losing about $400m from China operations alone citing conservative estimates as at mid-February 2020. But for Kenya Airlines, the losses are a big blow for the already troubled outfit. </p> <p>A takeover by the state is due to happen in May with lawmakers having approved the nationalisation of KQ to save it from mismanagement and mounting debt.</p> <p>Globally, the International Air Transport Association (<span class="caps">IATA</span>) forecasts the aviation industry will lose $29 billion worth of passenger revenues this year.</p> <p>Ethiopian airlines is the only significant African carrier which has maintained flights to China, where the coronavirus has killed over 2,000 and infected over 75,000.</p>