US warns of possible terror attack on airlines in Kenyan airspace 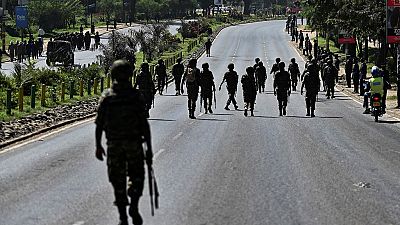 “Those persons are advised to exercise caution when flying into, out of, within, or over the territory and airspace of Kenya East of 40 degrees East longitude at altitudes below fl260 due to the possibility of extremist/militant activity,” the agency said.

The FAA asked American operators to report any security related incidents they may encounter within the airspace, in addition to sharing their travel plans at least 72 hours ahead of planned flights to Kenya.

“Such weapons could target aircraft at low altitudes, including during the arrival and departure phases of flight, and/or target airports and aircraft on the ground, especially at airfields located east of 40 degrees east longitude.”

The US and Kenya recently struck a new deal for direct cargo flights between the two nations.

Kenya’s security agencies have beefed up deployment in cities, towns and the country’s borders, following the United States’ warning of a possible terror attack.*
“The NPS has increased border surveillance to ensure criminal elements are cut from entering the country,” Kenya’s Inspector-General of Police Hilary Mutyambai said on Thursday night.

Mutyambai asked the public to remain vigilant and cooperate with security agencies, even as they go about their normal activities without fear.

The United States embassy in the country on Thursday issued an alert on the possibility of a terror attack at an unidentified, major hotel in Nairobi County.

In a short statement posted on its website, the embassy said the targeted hotel is popular with tourists and business travellers.

“If staying at a hotel, be aware of the hotel’s evacuation plan. Plan ahead of time how you would exit the hotel in case of an emergency,” it said.

Local newspaper Daily Nation said the office of the embassy spokesperson in Nairobi highlighted the bilateral cooperation when it comes to monitoring and sharing information about security.

“We have no greater responsibility than the safety and security of US citizens overseas. Security alerts to US citizens provide timely information so they can make informed travel decisions,” it said in explaining the decision to issue an alert.

Kenya has been the victim of multiple terror attacks by the Somali terrorist organisation, Al-Shabaab.