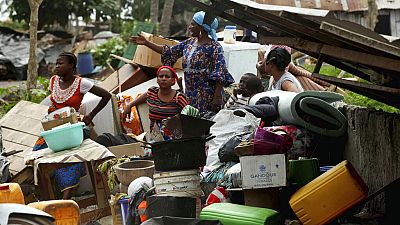 Construction crews began leveling homes deemed too close to the airport in Ivory Coast’s commercial capital on Thursday, part of a crackdown on informal settlements after a teenage boy died earlier this month as a flight stowaway.

The tragedy involving an Air France jet bound for Paris underscored the risks that many in the West African nation are willing to take for a chance to live in Europe when they lack visas and the financial means to take commercial flights.

Authorities said the evictions would help to establish a 200-meter (yard) safety buffer around the airport in Abidjan. Many of the affected residents pleaded for a grace period to allow their children to complete the current school year in July, but government officials said their homes were illegal.

The boy’s lifeless body was found after the flight landed at Paris’ Charles de Gaulle Airport, Air France said in a statement, expressing its “deepest sympathy and compassion for this human tragedy.”

While some of the 25,000 residents of the area were given 45 days notice to move, demolition crews began taking down homes closest to the airport on Thursday.

The crews even destroyed the neighborhood mosque, Imam Issa Sankoudouma said. “We said at least leave the mosque, smash the homes, but they smashed everything,” he said. “So the mosque has gone, we are here, we got what we could from our homes.”

“Our daily life is the search for food. How do they want us to find new homes when the price of housing is so high? We are waiting for the state to help us,” he said.