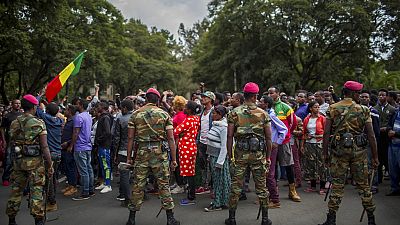 Multiple news outlets are reporting of a death and injuries to protesters after Ethiopia security forces fired at varsity students in the country’s south.

The privately-owned Addis Standard portal said about a dozen students of Bule Hora University had sustained injuries from the incident. One death was later reported by the portal.

Students of several universities in Oromia are protesting calling on the federal government to end ongoing armed conflict in west Oromia, the portal clarified. It is not known whether the security forces involved were from the regional security setup or they were federal officers.

Western Oromia has been the center of armed conflict that has over the last few months claimed the lives of regional state officials. The federal government is combating remnants of an insurgent group operating in the area.

The town of Bule Hora is located in the West Guji Zone of Oromia, Ethiopia’s largest and most populous region. Activists from the Oromo ethnic group were at the heart of mass protests that rocked the country between 2015 – 2018.

The protests led to a change of guard at the federal government level bringing into office Prime Minister Abiy Ahmed, himself an Oromo. He has undertaken widespread reforms and made peace with Eritrea, main reasons he was awarded the 2019 Nobel Peace Prize award.