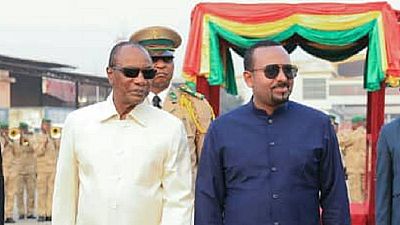 Ethiopians in the oil-rich Central African country lined up along major roads to welcome the Prime Minister. A number of them wearing attires that showed Abiy’s Nobel Peace Prize triumph.

Prime Minister Abiy Ahmed and his delegation arrived in Malabo, Republic of Equatorial Guinea for an Official State Visit.#PMOEthiopia pic.twitter.com/V2nAPIAfbP

He arrived in Malabo from Guinea Conakry where he undertook a two-day official visit. The PM’s office said Abiy held meetings with President Alpha Conde and visited the Port of Conakry.

The two agreed to bolster cooperation agreements signed in 2019 between the two countries. The agreements focused on areas of education, health, financial management, agriculture, culture and tourism.

During the stay in the Republic of Guinea, PM Abiy Ahmed also met with Governor El Rufai of Kaduna State, Nigeria and Nigerian business tycoon,Tony Olumelu, to discuss investment opportunities in Ethiopia in various burgeoning sectors.

Fana reports that after his engagements in Malabo, Abiy heads to South Africa for two-day official state visit. The visit aims to strengthen the diplomatic relations between the two countries and boost ties, the state-media added. Abiy will meet with South African officials and Ethiopians residing there.

PM AbiyAhmedAli concluded his Republic of Guinea visit earlier today where key agreements were made with President Alpha Conde to activate the partnership in the areas of agriculture, tourism, mining and energy. 1/2 pic.twitter.com/gV609S4gMD