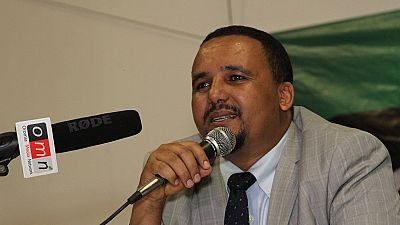 <p><strong>Ethiopia’s prominent activist Jawar Mohammed explained that he joined the opposition Oromo Federalist Congress party (<span class="caps">OFC</span>) because of its strong stand on federalism.</strong></p> <p>Jawar’s membership in <span class="caps">OFC</span> comes five months before general elections that will test the popularity of reformist Prime Minister Abiy Ahmed in the east African nation of more than 100 million people.</p> <p>“I have been working with the party as a supporter for a long time,” Jawar told The Associated Press on Tuesday. </p> <p>“I am attracted to the party because of their clear and strong stand on federalism.”</p> <p>Jawar and the party are expected to call for greater autonomy for Ethiopia’s regional states, including Oromia, which is the largest and most populous.</p> <p>‘‘The Oromo objective is very clear. It boils down to self-rule, which can be translated into cultural, political and economic autonomy, having full ownership over the wealth God has given us…also being able to govern our home region by a government elected by the Oromo people.’‘ </p> <p>Bitter ethnic rivalries resulting in violent clashes are one of the most serious challenges to Abiy’s government. More than 1,200 people were killed and more than 1.2 million others displaced in clashes in the country within the past year, Ethiopia’s Attorney General Office disclosed in September. The clashes, most of which took place along ethnic lines, threaten Abiy’s reforms.</p> <h2 style="font-size:16px;">Falling out with Abiy</h2> <p>Until recently, Jawar was seen as an ally of the prime minister. When he was living in the U.S. many say Jawar played a key role on social media in mobilizing widespread protests that led the previous prime minister to resign and saw Abiy rise to power in April, 2018.</p> <p>Last year, Abiy relaxed restrictions on political activists which allowed Jawar and others to return to Ethiopia without fear of arrest.</p> <p>But recently frictions emerged between Abiy and Jawar. In October Abiy criticized “media personalities with foreign passports” for causing troubles in Ethiopia, a comment widely seen as criticism of Jawar.</p> <p>A day later, Jawar alleged there were attempts to remove his government-provided security guards and hundreds of his supporters flocked to his residence to offer him protection. Unrest that followed in some parts of the country, mainly Oromia, resulted in the deaths of several dozen people.</p> <h2 style="font-size:16px;">Jawar’s plan for 2020</h2> <p>Jawar, owner of the Oromo Media Network which has a television station, website and magazine, has more than 1.7 million followers on Facebook and a large support base in the Oromia region.</p> <p>“I will use my influence, network, and experience to help strengthen the party,” he said, adding that the party will decide what office he will run for in the upcoming elections in May, 2020.</p> <p>One last hurdle remains before he can launch a political career, however. Jawar holds U.S. citizenship, which prevents him from being a candidate for office in Ethiopia. He said he has started the process of relinquishing his U.S. passport and regaining his Ethiopian citizenship. He said “it will be completed soon.”</p> <p>Jawar is seen by many as a polarizing figure. While many in Oromia consider him a hero who pushed hard for change in Ethiopia, others call him an opportunist who is waiting for the right time to assume power.</p> <p>“Jawar joining the opposition party’s leadership would convert the party into a major political force, as he is popular among Oromo and has considerable ability to influence and mobilize Oromo voters using his various media platforms,” William Davison, International Crisis Group’s Senior Analyst for Ethiopia, told the AP.</p> <p><strong><em>AP</em></strong></p>

I will use my influence, network, and experience to help strengthen the party.