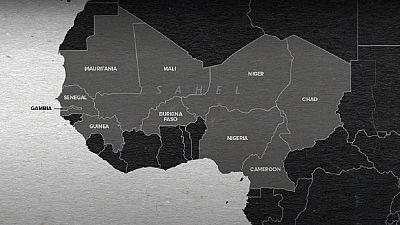 Active armed conflicts continues to ravage parts of Africa be it as a result of the state versus terrorist groups or infighting between political factions, a typical case of the latter being South Sudan.

Some of the deadliest anti-terror campaigns are in West Africa specifically in the Sahel and Lake Chad regions. Al-Qaeda in the Islamic Maghreb, AQIM, continues to make incursions into the Sahel with heavy death toll – on the part of combatants and civilians.

Boko Haram, a decade on, continues to wreak havoc in the Lake Chad region, an area straddling Cameroon, Nigeria, Chad and Niger. Al-Shabaab is ever active in Somalia whiles Democratic Republic of Congo and Mozambique are all battling insurgencies in the east and north respectively.

The area is an semi-arid zone that stretches miles from Mauritania, through much of northern Mali, Chad, Burkina Faso till Chad – it extends to as far as the extreme north of Ethiopia. The region is bordered to much of north and west Africa by the Sahara desert.

In the case of the particular area that is hit by active terrorist activity, five countries are in line of the fire. Mauritania, Chad, Mali, Burkina Faso and Niger, who form the G5 Sahel bloc.

The land mass in question is so huge and with little state presence. Security experts have usually alluded to instability in especially Libya as a key source of arms for the insurgents running riot in the Sahel region.

UNDP feature on the Sahel

For the year 2019, the insurgents undoubtedly announced their presence more in Burkina Faso, hundreds of civilian were killed in their incursions.

Places of worship especially churches became a main target with consistent deadly attacks in the middle of this year. Mali suffered big losses across its territories – soldiers were killed in attacks whiles the United Nations Mission also lost personnel in attacks. The country’s security headaches were exacerbated by ethnic clashes that also claimed scores of lives.

“Since January alone, more than 1,500 civilians have been internally displaced across the five countries, representing more than twice the number of persons displaced in 2018,” UN chief Antonio Guterres told the Security Council in November 2019.

He said Burkina Faso had experienced the most significant rise, with 486,000 displaced people this year compared with 80,000 last year.

The G5 Sahel group met multiple times across the year – at home and abroad, seeking to map out means to combat the threat. The first of these meetings was during the visit of German Angela Merkel to Burkina Faso early on in the year.

The United Nations through its Secretary General stressed the looming danger of terrorists getting a foothold in the region.

“Terrorism is a global issue, and the entire international community has a responsibility to contribute to the collective effort of tackling extremist violence in the Sahel, along with other cross-border challenges, including trafficking in persons, illicit goods, weapons and drugs, and migration and displacement,” he said.

In the November briefing to the UNSC, Guterres also welcomed contributions from the European Union and others, and noted the U.S. provision of equipment and training to troops from Chad, Mauritania and Niger.

But he said the G5 Sahel force will need more support “to fully play its role and yield more tangible results” in combating the Islamic State and other extremist groups.

The United Nations representative for the Sahel and West Africa, Mohammed Ibn Chambas, late in the year admitted to the United Nations Security Council that the region had been exposed to unprecedented chaos and there was the need to find a cure as soon as possible.

The French attack in Mali and France’s fightback

Then came the helicopter mishap that led to the death of French soldiers who were reportedly pursuing insurgents according to official records. The insurgents gave a different version of events, that they had actually killed the soldiers.

It was then that the French government began to make concrete demands of the G5 Sahel member states. President Macron said France needed concrete demands from these countries on the need for military assistance.

Paris said ant-French sentiment across much of the region was making their involvement even more difficult. Paris had reason over the year to dispel talk of ulterior motives in its involvement in the Sahel.

A meeting scheduled for southern France was postponed to early 2020 on the request of G5 members.

In one attack on a military base, Niger reported a loss of 71 soldiers. President Mahammadou Issoufou cut short an engagement in Egypt to return home.

The slain soldiers were granted a state burial whiles the president promised during a televised address that the country was going to win the battle against insurgents.

“I know that all of our people support our defence and security forces, the defence of the nation and the integrity of the territory is a duty for all of us, civil or military. The government will mobilize not only the material and human resources,” he said.

All eyes on the French city of Pau where G5 leaders are expected to meet with their French counterpart for the much awaited talks. The security forces across these countries will continue to do all it takes to protect themselves and the lives of civilians across the region.

What is also sure is that the insurgents will attempt to achieve the reasons for which they attack and kill people. But residents of the region will hope for a peaceful 2020 having survived a hellish 2019 in the Sahel.