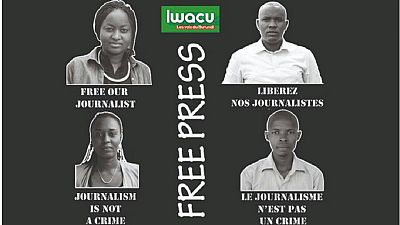 Four journalists in Burundi were charged on Monday with breaching state security and denied bail, according to local media reports.

The driver of the journalists also faces the same charges. The court hearing in Bubanza, in western Burundi, was their first appearance in public since their arrest on Oct. 22.

If convicted, the state prosecutor has called for 15-year jail sentences and the seizure of their belongings including a car they were using when they were arrested. He also called on the judge to deny them the right to vote for five years.

The reporters, two females and two males from the Iwacu media group, were arrested in Musigati District where they had traveled to report on an armed attack by anti-government rebels.

They have been accuse of “complicity in the breach of the State’s internal security.” The ruling is expected within 30 days.

In November, when a court decided to keep the Iwacu journalists in detention, many organizations including Reporters Without Borders and the Committee to Protect Journalists said they were disappointed by the Burundian justice’s decision. The reporters and their driver were represented in court by three lawyers.

“We are satisfied by the way the hearing was conducted. The court allowed all parties to express themselves and gave us enough time to defend them,” Clement Retirakiza, one of the lawyers, told journalists covering the hearing.

Last week, President Pierre Nkurunziza commented on the case against the journalists when asked about it at a public conference.

“According to ( Burundian) law … the president, even though he is the supreme judge, has no right to interfere with a case which is still going on,“said Nkurunziza.

“I will only suggest that they should find lawyers who can help them. If I interfere with the justice’s decisions, it would be undermining the independence of the justice system,” said Nkurunziza. “We only intervene as a supreme judge after finishing all the kinds of appeal.”