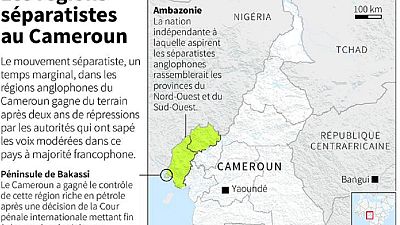 Armed separatist movements in Cameroon have dismissed the approval of a spacial status to Anglophone regions by the country’s parliament, insisting that only independence would satisfy them.

Parliament on Friday granted special status to the North West and South West English-speaking regions to try to calm a separatist insurgency that has killed 2,000 people.

The law, passed in a special session of parliament, says the Anglophone regions “benefit from a special status founded on their linguistic particularity and historic heritage”.

We want independence and nothing else.

It mentioned schools and the judiciary system as part of the special status — a delayed response to protests in 2016 by teachers and lawyers.

Conflict between Cameroon’s army and English-speaking militias seeking to form a breakaway state called Ambazonia began after the government cracked down violently on peaceful protesters complaining of being marginalised by the French-speaking majority.

The insurgency has forced half a million people to flee and presented President Paul Biya with his biggest threat in nearly 40 years of rule.

“This is a law unique in the world,” said senator Samuel Obam Assam, from the ruling Cameroon People’s Democratic Movement, the majority group in the Senate. “It is an answer to our fellow countrymen’s concerns.”

But Jean-Michel Nintcheu, a congressman from the main opposition party, said he did not believe the law would solve the crisis.

“The Anglophones, even the moderate ones, want a federal state. This law is not the result of a dialogue.. we were against it,” he said.

The reforms were recommended at the end of national talks organised by Biya in October to chart a way out of the conflict.

But separatists boycotted that dialogue, saying they would negotiate only if the government released all political prisoners and withdrew the military from the Northwest and Southwest.

“We want independence and nothing else,” said Ivo Tapang, a spokesman for 13 armed groups called the Contender Forces of Ambazonia.

He said the special status made no difference as no law passed in the Cameroonian parliament should be imposed in Ambazonia.

The roots of Cameroonian English speakers’ grievances go back a century to the League of Nations’ decision to split the former German colony of Kamerun between the allied French and British victors at the end of World War One.