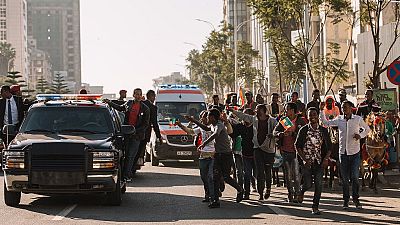 Ethiopians gave a hero’s welcome to Prime Minister Abiy Ahmed upon his return from Oslo, Norway where he received the 2019 Nobel Peace Prize Award earlier this week.

Major roads from the Bole International Airport to the National Palace were blocked this morning as hundreds of thousands line up along the streets to cheer the Prime Minister.

Many people were seen waving photos of the PM, others had flags running along the entourage and giving security forces a hard time as they attempted to catch a glimpse of Abiy.

The laureate was in the front seat of a car waving to the teeming crowds that were cheering him.

Ethiopians have been celebrating the Prime Minister on social media since he received the award. His efforts in brokering peace with neighbouring Eritrea and widespread reforms at home made him the 100th winner of the Nobel Prize.

His efforts at consolidating regional peace was the third plank that the Nobel Committee cited in choosing him as winner. He is the first Ethiopian to win the award.