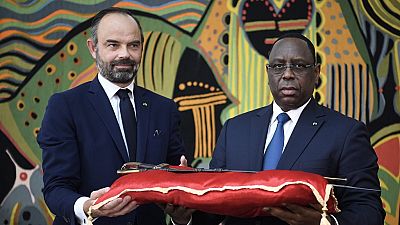 French Prime Minister Edouard Phillipe was in Senegal over the weekend on an official visit. He held talks with President Macky Sall was the two countries signed seven bilateral accords.

A major historic and cultural highlight of the visit was France’s restoration to Senegal of a sword belonging to a 19th Century Islamic scholar and ruler, Hajj Umar Saidou Tall, who led an anti-colonial struggle against the French.

France has in recent years pledged the return of historic artefacts looted from its former colonies especially in West Africa. A typical case in point is with Beninese artefacts locked up in French museums.

The Prime Minister at a ceremony at the presidential palace in Dakar handed over the relic – curved iron, brass and wood sword in its sheath to President Macky Sall.

Reports indicate that descendants of the scholar were present at the ceremony. Their representative thank both governments for working towards the restitution.

PM Philippe stressed that the return was “the first step” in Paris’ resolve to returning more Senegalese artefacts currently in French museums.