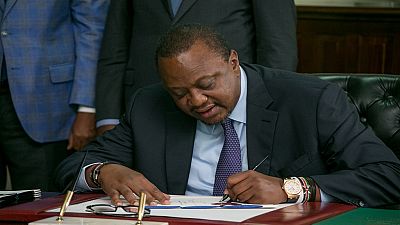 Kenya’s president Uhuru Kenyatta rejected any gay agenda to be tabled in a global population conference to be held in Nairobi next week.

Kenya will host the population conference “but will not accept practices that are at conflict with our cultures,” President Uhuru Kenyatta has said.

Kenyatta reiterated Kenya’s stand to protect cultural norms by not allowing any practices that will be seen devaluing traditions of various local communities.

It is understood that the President was referring to the push by reproductive health activists for legal abortion and homosexual rights during the conference.

“We will welcome the visitors Nairobi. We will be there and we will listen. But will be firm in rejecting what we do not agree with,” he said.

“We have a stand,” he said, adding that “But on things that do not conform with our cultures and religion, we will firmly reject,” he told the gathering attended by UNFPA country director Ademola Olajide and western diplomats.

President Kenyatta has been quoted many times rejecting total inclusion of homosexuals in the constitution.

Several Africa states have made it illegal to practise homosexuality though some have changed tune.

In January, Angola issued a revised penal code that no longer punished so-called “vices against nature.” Other African countries that have revoked anti-homosexuality laws through penal code reform in recent years include Seychelles, Mozambique, Sao Tome and Principe, and Lesotho. Botswana’s High Court is scheduled to hear a case in June, on the constitutionality of laws that make same-sex intimacy a crime.