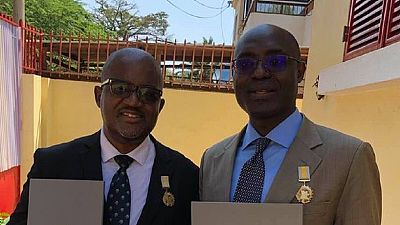 <p>Two Angolan activists considered “enemies of the state“ by the erstwhile Jose Eduardo dos Santos government have been awarded presidential medals by President Joao Lourenco.</p> <p>They are human rights activist, Rafael Marques and anti-corruption crusader, Sousa Jamba. The award was in recognition for the roles that they played in keeping government accountable.</p> <p>The duo were part of a group of 70 other personalities who were awarded by the presidency on Thursday for their service of the development of Angola.</p> <p>“Human rights activist and anti-corruption activist Rafael Marques and writer Sousa Jamba today received the Angolan Presidential Medal for their outstanding work for the benefit of the nation,” wrote Zenaida Machado, a researcher for Human Rights Watch (<span class="caps">HRW</span>) wrote on Twitter.</p> <p>According to the president, this recognition “should put an end to the clichés and stereotypes Angola suffers in relation to its human rights record.”</p> <p>Angola’s human rights credentials remained very low for the close to four decades that dos Santos was in charge. Same was the case in respect of the fight against corruption as he was severally accused of nepotism and clampdown on activists.</p> <p>In the case of Rafael Marques, he was routinely tried and jailed by government for his activism under dos Santos.</p> <p>After his last acquittal, Marques was invited as part of a civil society meeting with the president but a protocol gaffe scuttled his admission to the meeting forcing the president to issue an apology to his guest. </p> <p>Since Lourenço came to power in 2017, Luanda has gradually been taking on a new leaf in the two areas – of human rights and anti-corruption. </p> <p>Dos Santos era officials have been fired from their positions over issues especially of corruption. Some of those affected are children of the former president who have lost top government posts.</p>