Ethiopia PM hit by protests during engagement in Oromia's Ambo 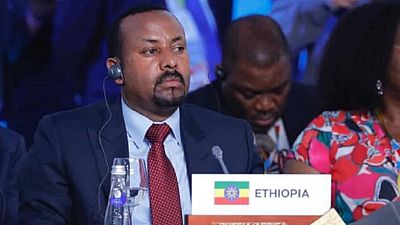 A section of Ethiopians protested against Prime Minister Abiy Ahmed when he participated in a community consultation mission in the town of Ambo in Oromia regional state.

Protest erupted in #Ambo infront of a hotel where PM AbiyAhmedAli is holding a meeting with local people. Only those carefully selected made it to the hall which triggered the protest.
The military is trying to calm the situation down.#Oromia #Ethiopia pic.twitter.com/LoG1Y2OdZM

The state-run Fana broadcasting corporate said the PM was holding consultation with community members represented from different parts of Oromia – the nation’s most populous and biggest.

Reports indicate that the exchanges were centered around the need for peace and unity in the wake of violent clashes last week. The tensions arose from an alleged government move to clandestinely withdraw security for a to activist, Jawar Mohammed.

Protests in favour of and against Abiy spread across parts of Oromia and led to deaths, destruction of property and injuries. A Reuters report noted that the incidents were ethnically tinged.

Also present at the discussion were also Minister of Defense and ex-Oromia regional president, Lemma Megersa and the current leader of Oromia, Shimelis Abdissa.

FBC quoted Fekadu Tesemma, a member of the Oromia governing party, Oromo Democratic Party, as saying: “if we are united, we can easily tackle any problem.”

#Ethiopia: A protest rally against PM Abiy Ahmed is held today in #Abmo city where he, along with Lemma Megerssa & Shimelis Abdissa, was participating in community discussion regarding recent violence in #Oromia with residents from Ambo & its environs https://t.co/rV6Dy0CnmI pic.twitter.com/HW6WnrF5lJ