Deadly floods across Africa: Somalia to Cameroon, C.A.R. to Nigeria 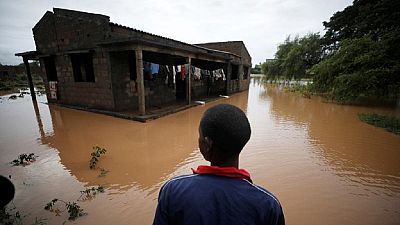 Floods in parts of Africa are wreaking havoc with rising death tolls and damage to properties. In the case of the Central African Republic, a national catastrophe has been declared.

From Beledweyne in Central Somalia through to Bafoussam in Western Cameroon, the Central African Republic’s capital Bangui and parts of northeastern Nigeria – Adamawa and Kogi States.

Over in Ghana, unexpected rains in October continue to adversely affect parts of the country. Large areas of the north were submerged weeks back whiles a motorway connecting the capital Accra to the industrial hub of Tema got cut off due to floods.

A number of areas in the Horn of Africa nation were submerged in the wake of heavy downpour. The United Nations humanitarian outfit, OCHA, said in its briefing that: “An estimated 182,000 people have been displaced thus far due to flooding, according to UNHCR-Protection Return Monitoring Network (PRMN).

“Farmland, infrastructure and roads have been destroyed, and livelihoods disrupted in some of the worst-hit areas.

“In Hirshabelle State, the Shabelle River levels in Belet Weyne town and surrounding areas reached bankfull on 26 October 2019, leading to spillage which has submerged the town.

Three people, including two children under the age of 10 years, were reported to have drowned. Latest reports received in the morning of 28 October indicated that a boat carrying 20 people capsized in the river in Belet Weyne town.

Over 40 bodies were recovered from a landslide in Bafoussam, Western Cameroon on Tuesday (October 29). Dozens others were reported missing following torrential rains that caused the landslide.

“We present the government’s solidarity with Bafoussam. I think it is useful that, without delay the government support the people here who have lost everything so that they receive the kind of support that help them not to completely restart their lives but to at least deal with the present situation,” said George Elanga Obam, Minister for Centralization and Local Development.

The landslide occured at around 21:00 GMT when most people were in their homes. The government deployed rescue teams and the military at the site to search for more survivors.

It is estimated that at least 120 people live in the neighbourhood which was swept away by the floods.

Thousands lost their homes after two days of rain and severe flooding in the Central African Republic. On Sunday, the government said more than 20,000 people have been made homeless across its provinces and additional 8,000 in the capital, Bangui.

A coordinator for one of the makeshift camps set up for residents displaced by the floods in Bangui is concerned that more homes were likely to fall.

“Really, we need assistance. Some homes were destroyed, families are outside their homes. It is hard when you leave your house, unexpectedly. To see something that you spent years building collapse, that is hard, I feel sad,” Rock Lionnel Koigningbo said.

The situation has worsened following the overflow of the Oubangi river, located in the southwest of the capital. The State is appealing for international support.

Heavy rains in Kogi State, central Nigeria, had unintended consequences beyond the destruction and displacement of tens of thousands. It enabled over 100 prisoners to escape detention after the rains entered the holding facility.

“Detainees’ cells were submerged in water and some detainees forced their way out in order not to get drowned,” and official told the media. Prison officials managed to re-arrest some of the escaped inmates.

The central states of Niger, Benue, Kogi and Taraba are particularly affected by flooding. The rains have destroyed crops while forcing tens of thousands of people to leave their homes, according to the National Emergency Management Agency, NEMA.

More than 40 villages in Adamawa State located in northeastern Nigeria have been totally destroyed by water in recent days.

In Ghana’s Ashanti region, floods have claimed 11 lives as at October 29, local media outlets reported. The effects of the heavy rains continue to be felt in the west African country.

From mid-September, rains have displaced scores in the country’s Upper West region leading to a displacement crisis that the National Disaster Management Organization, NADMO, continues to grapple with.

Further down from the north, regionals in central part of Ghana continue to suffer the effects of the rains which are coming out of season. Ghana’s rainy season has often been mid-year but the September – October rains this year have been unexpected.

Experts have said the torrents of rain at this time of the year was indicative of the effects of climate change. The more reason that governments and other partners are supposed to work to mitigate the worsening effects on people.