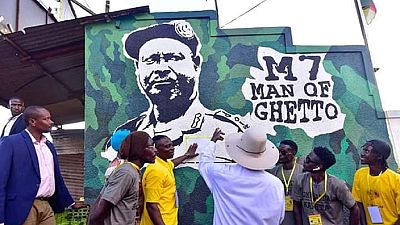 Uganda’s ‘ghetto president’ has taken a swipe at the country’s president – the latest spat is over the ‘ghetto’ label.

The painting with Museveni’s ghetto credentials was outdoored over the weekend during a ruling party youth wing event.

The president had launched the NRM empowerment office for youth living and working in the areas of Kibuye and Katwe. The office according to the president was to make it easy for government to support the youth in their different productive groups.

For Bobi Wine, the president was scared by political events in the ghettos hence his latest move to endear himself to people in that constituency.

“After so many years, and tired of indignity, the ghetto people rose up to speak for themselves. Led by the Ghetto President, they made it clear that enough was enough. The ghetto went to Parliament and embarked on the process of taking over the nation’s leadership and changing the country forever.

“He first dismissed us. But we persisted. He threatened us. We stood firm. He bribed some ghetto people but the ghetto youth stayed on course. They asked me to continue shaking the tree, because that is the only time they saw government coming to them.

“Having failed in all his schemes; very scared and desperate, President Museveni now returns as ‘Man of Ghetto.’ The sheer lack of shame! I can assure him that the authentic ghetto people will not permit him to mock them,” Bobi Wine wrote in a Facebook post.

75-year-old Museveni has been president since 1986 after leading a bush war. He oversaw the return to multi-party democracy and has won all presidential polls within that period.

Despite being one of Africa’s longest serving leaders, he is billed to seek a new term in office when next elections are held in 2021.

Bobi Wine has also expressed his intention to contest in the polls under the banner of his People’s Power movement. Uganda’s main opposition party, Forum for Democratic Change, FDC, has yet to elect a flagbearer.

The FDC’s last candidate was the historic opponent to Museveni, Kizza Besigye, who lost the last polls but was arrested and charged for treason after he swore himself into office.