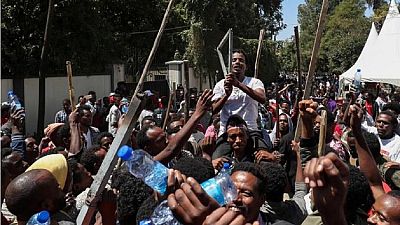 After winning the 2019 Nobel Peace Prize,Ethiopian Prime Minister Abiy Ahmed has seen his reputation put to test following recent violence in his country that led to the killing of 67 people last week in demonstrations.

On Saturday he denounced “an attempt to provoke an ethnic and religious crisis”, after violence that killed 67 people this week in demonstrations.

“The crisis we are experiencing could get even worse if the Ethiopians do not unite,” Abiy said in his first statement since the clashes began.

“We will work tirelessly to ensure that justice prevails and bring the guilty to justice,” he said.

“There is an attempt to turn the current crisis into an ethnic and religious crisis,” denounced the reformist Prime Minister.

Violence broke out on Wednesday in the capital, Addis Ababa, before spreading to the Oromia region, when supporters of a controversial activist, Jawar Mohammed, took to the streets, burning tires and erecting barricades, blocking roads in several cities.

The clashes pitted demonstrators against the police, but also communities against each other. Property belonging to the Ethiopian Tewahedo Orthodox Church, some of which is associated with the Amhara community, has also been targeted.

On Friday, the head of the police in Oromia State, Kefyalew Tefera, reported a death toll of 67, including five police officers. He pointed out that most of the victims had lost their lives in “clashes between civilians”, not during the intervention of the police.

The Ministry of Defence announced on Friday the deployment of military personnel in seven areas where the situation remained particularly tense.

Jawar Mohammed, the founder of the opposition media Oromia Media Network (OMN), is a former ally of Reform Prime Minister Abiy. Both belong to the Oromo community, the largest ethnic group in Ethiopia.

But relations between the two men have recently deteriorated, as Jawar Mohammed publicly criticized several reforms of Abiy Ahmed.