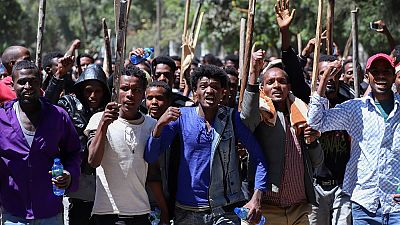 Protests in support of prominent Ethiopian activist Jawar Mohammed entered a second day on Thursday in several Oromo cities, even as hundreds of his supporters set up camp around his house in Addis Ababa.

Police fired gunshots and teargas to break up demonstrations against his treatment by the government, with local news portal Addid Standard reporting that four people were killed in the city of Dodolla on Thurdsay.

At least five people were killed in Wednesday’s clashes in the capital and other cities, officials and residents said.

Abiy has won international praise for his political reforms in a country that has suffered decades of repressive rule, and last week was awarded the Nobel Peace Prize for his efforts to resolve a long-running conflict with neighbouring Eritrea.

But the greater freedoms have lifted the lid on long-repressed tensions between Ethiopia’s many ethnic groups and Abiy has accused unnamed media figures of promoting ethnic interests over national unity.

Both he and Jawar are from the Oromo ethnic group, Ethiopia’s largest, as are most of the protesters. But the flare-up in unrest indicates Abiy might be losing support among his own powerbase.

The demonstrations began on Tuesday after police surrounded Jawar’s house. Protests quickly spread to other parts of the capital and to the cities of Adama, Ambo, Harar and Jimma, residents said.

Following the outbreak of violence on Wednesday, Jawar supporters erected tents outside his house on Thursday and brought matresses, signalling they intended to stay there.

“One week, one month, we don’t care, we will stay here until the government tells us why they did this to Jawar,” said a young protester, who asked for anonymity for fear of repercussion from the security forces.

Half a dozen policemen stood outside Jawar’s house at a distance from the protesters, while several roads heading out of Addis Ababa remained closed.

Jawar, an Ethiopian-born U.S. citizen, mobilized many thousands of young men all over the Oromiya region to protest against the government from 2016 to 2018, building pressure that led to the resignation of Abiy’s predecessor Hailemariam Desalegn and Abiy’s appointment.

Though Jawar and Abiy were photographed together frequently last year, remarks by the prime minister on Tuesday suggested frustration with media entrepreneurs like Jawar who are seen to be promoting ethnic agendas ahead of Ethiopian unity.

On Tuesday, Abiy said in a speech to parliament, without naming anyone: “Those media owners who don’t have Ethiopian passports are playing both ways.”

“We tried to be patient. But if this is going to undermine the peace and existence of Ethiopia…we will take measures. You can’t play both ways,” he said.

Abiy must walk a delicate line between increasing political freedoms and reining in strongmen building ethnic powerbases by demanding more access to land, power and resources for their groups.

Some Ethiopians have criticised Jawar for using ethnically tinged language, but many young Oromo men consider him a hero.