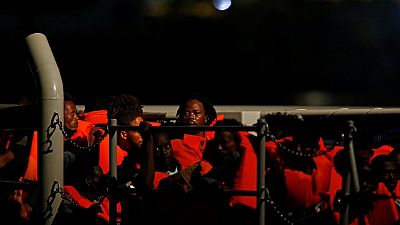 At least 71 illegal migrants rescued after four days in distress at sea were brought to shore east of the Libyan capital Tripoli early on Sunday but then fled and no attempt was made to capture them, a navy official said.

In this incident, the U.N. refugee agency reported late on Saturday that an inflatable boat carrying scores of migrants had capsized off the Libyan coast and that the Libyan coastguard dispatched a patrol boat to search for them.

After the illegal migrants were brought back to the shore at around 9.30 am (on Sunday), they fled.

None of the migrants drowned or were hurt in the incident, though two were in a poor condition after four days at sea without food and water and they received medical treatment, said the official, who spoke on condition of anonymity.

“After the illegal migrants were brought back to the shore at around 9.30 am (on Sunday), they fled,” the official said.

The incident took place in the town of Al-Khums, some 120 km (75 miles) east of Tripoli.

The navy official, speaking in Al-Khums, said there were no orders to use force to intercept the migrants, and officials did not try to move them to detention centres run by the U.N.-backed Government of National Accord.

A coastguard spokesman in Tripoli, Ayoub Qassem, confirmed the rescue operation but said the migrants had been released after failed attempts to move them to a detention centre.

Thousands of migrants are held in Libyan government-run detention centres in what human rights groups and the United Nations say are often inhuman conditions.