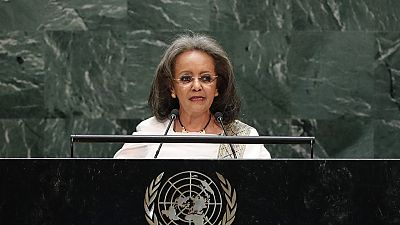 Every year in September, all 193 members of the United Nations meet at the General Assembly at the organisation’s headquarters in New York.

The General Assembly is one of the six main organs of the UN, where several international issues covered by the Charter of the United Nations, such as development, peace and security, international law are discussed.

This year’s assembly which starts on September 17, has climate change, universal health coverage and the politics of sustainable development, on the agenda.

There will also be meetings on financing for development, elimination of nuclear weapons and the Sustainable Development Goals (SDGs).

Ghana will occupy the first seat in the Hall for this year’s session, including in the main committees, followed by all the other countries, in English alphabetical order.

Ethiopia’s president Sahle-Work Zewde used her maiden speech at the United Nations to respond to Egypt’s call for international intervention in the ongoing Nile dam dispute.

While Egypt’s president, Abdel Fattah el-Sisi told the UN General Assembly that ‘The Nile water is a matter of life and an issue of existence for Egypt’, Sahle-Work sought to ease tensions.

She told delegates that the River Nile should not be an object of competition and mistrust, adding the dam project offered a unique opportunity for all the countries along the river to co-operate to share the waters.

Sahle-Work Zewde reiterated her country’s commitment to reach a deal over the Grand Renaissance Dam, which is being built on the Blue Nile near Ethiopia’s border with Sudan.

Egypt and Ethiopia have failed to agree on critical issues regarding the operation of the dam including the the amounts of water that should be released annually from the dam, and the speed at which Ethiopia fills up the dam’s reservoir which will affect the flow downstream.

In his first address to the UN General Assembly, the president of the Democratic Republic of Congo, Félix Tshisekedi highlighted several issues including the country’s development needs, the fight against Ebola and the security situation.

Tshisekedi started off his speech by re-echoing Africa’s call for security council reform.

“It is indeed unfair that Africa remains the only region in the world that does not have permanent representation on the Security Council, when in fact the major issues – be they demographic, social or environmental – for the whole planet are inextricably linked to Africa,” he said.

“We want a configuration and that is more representative of the world’s peoples in their diversity.”

He then addressed the role that the DRC can play in achieving the Sustainable Development Goals (SDGs).

“The eradication of poverty and hunger is today an urgent issue. The Democratic Republic of the Congo can be part of the solution, with its 80 million hectares of arable land and its abundant water sources that are enough for more than two billion people,” he stated.

The 17 SDGs seek to create a more just and equitable world by 2030.

The president than offered to open up the country to regulated mining in exchange for development support, highlighting the DRC’s wealth in natural resources needed to power the energy and digital transition.

“The world needs cobalt, it needs coltan, and it needs lithium. We want industrial jobs. We need training and we need development,” he said,

Tshisekedi, who took office in January this year, said the greatest challenges facing his country are the armed groups that operating in the east.

“As if conflict and instability were not enough, countries to the east of the DRC are also affected by an Ebola epidemic that has lasted more than a year.”

He lauded the country’s new UN-supported strategy against which will be reinforced “by the introduction of five new approved drugs, in addition to the Ebola vaccine, which will completely get rid of the disease’‘.

Felix Tshisekedi, who became president of the Democratic Republic of Congo in January will address the United Nations General Assembly for the first time on Thursday.

Ethiopia’s president, Sahle-Work Zewde, will also make her maiden speech at the United Nations, since she was appointed to the position in October last year.

Sahle-Work, who became Ethiopia’s first female president, is however not new to the United Nations, having served as U.N. under-secretary general and special representative of the secretary general to the African Union, before she was called upon to serve her country.

Other African heads of state lined up to speak on Thursday include;

The following African heads of state are expected to take part in the United Nations General Debate on Wednesday.

Egypt’s Sisi asks for help over dam dispute with Ethiopia

Egypt’s president, Abdel Fattah el-Sisi has raised the matter of the Nile dam dispute at the United Nations General Assembly, saying negotiations have so far been unfruitful.

Egypt and Ethiopia have failed to agree on the operation of a dam that the latter is constructing on the River Nile to generate more than 6,000 megawatts.

Negotiations over the annual flow of water that should be guaranteed to Egypt and how to manage flows during droughts resumed last week, but Sisi’s remarks at the UN confirm that no progress has been made.

Ethiopia has said GERD will start power production by the end of 2020 and be fully operational by 2022.

The Egyptian leader said he hoped the international community can compel all players in the negotiations to be flexible.

Sisi, who is also the current chairperson of the African Union reiterated the African bloc’s call for security reform.

The General Debate session kicks off Tuesday, with several heads of stae lined up to speak.

This year’s theme for the debate is ‘‘Galvanising multilateral efforts for poverty eradication, quality education, climate action and inclusion”, in line with the priorities set by the president of the General Assembly, Professor Tijjani Muhammad-Bande, Nigeria’s permanent representative to the United Nations.

A voluntary 15-minute time limit for statements is to be observed in the general debate.

Since the 10th session of the General Assembly in 1955, Brazil has always been the first member state to speak in the general debate, followed by the United States of America as the host country. Other members then follow, based on the level of representation, preference and other criteria such as geographic balance.

The African heads of state scheduled to speak on Tuesday include;

South Africa’s president, Cyril Ramaphosa will be one of the notable absentees, having opted to deal with pressing domestic issues back home.

We look forward to the robust discussions on the various multilateral engagements which are scheduled to take place over the next few days at the 74th United Nations General Assembly. #TeamSA #UNGA #UNGA74 pic.twitter.com/UInPxfiBTq

Nigeria’s permanent representative to the United Nations, Ambassador Tijjani Muhammad-Bande, was this week elected president of the 74th General Assembly.

The United Nations Secretary-General António Guterres commended the Nigerian scholar and diplomat for prioritising peace and security, poverty eradication, zero hunger, quality education, climate action and inclusion, all of which the UN chief called “central to the sustainable development agenda”.

‘‘He also brings valuable insights into some of the pressing peace and security, human rights and sustainable development challenges facing this body, from the spread of violent extremism to the threat of the global climate crisis,’‘ Guterres said.

‘‘I also applaud your emphasis on human rights and gender parity,’‘ he added.

In his inaugural address as General Assembly President, Prof. Muhammad-Bande said he would “collaborate and coordinate” with the Security Council, and the Secretariat “to ensure that greater attention is paid to prevention rather than reaction to full blown conflict.”

‘‘I will also advocate for effective early detection and warning systems, as well as mediation, negotiation and peaceful settlement of ongoing conflicts,’‘ he promised.

‘‘The recent emergencies in the Bahamas, Mozambique, and the Sahel region, among others, reminds us of the urgency of strengthening global action to tackle climate change,’‘ he argued.

The world’s best teacher, who hails Kenya, Peter Tabichi, is set to address the 74th United Nations General Assembly, which brings together world leaders from the organisation’s 193 members.

Tabichi, who won the 2019 Global Teacher Prize in March this year, is a member of the St Franciscan Friars, a religious order founded by St Francis of Assisi in the 13th century.

On Tuesday, the White House press secretary, Stephanie Grisham, shared a picture on Twitter showing that Tabichi, had met with US president, Donald Trump.

This morning, President realDonaldTrump met with Peter Tabichi, the recipient of the 2019 Global Teacher Prize! Peter is a science teacher who gives away 80% of his monthly income to help the poor in his home country of Kenya. pic.twitter.com/SS9b7IATNC

‘‘Peter, you inspire us all! Thank you for your commitment to your students,’‘ Stephanie tweeted.

Brother Tabichi is set to recite the popular St Francis prayer before the start of the general assembly, according to Brother Tony Donald from Ireland.

“This is a big honour for St Franciscan brothers. It shows that the UN recognises our order as it plays a key role in the development of humanity,” he said.

Tabichi will also share his inspirational story with delegates at the assembly.

The Prayer of St. Francis 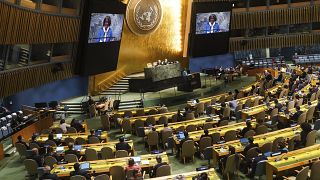