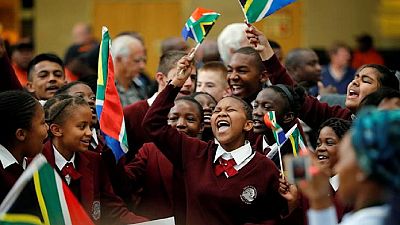 Chief Justice Mogoeng Mogoeng, who presided over the case, declared that ‘reasonable chastisement’ of children was inconsistent with the Constitution.

The court added that there are other ways of effectively disciplining a child, without resorting to corporal punishment.

“There is, therefore, a less restrictive means envisaged by Section 36 of the Constitution available to achieve discipline.”

The ruling upholds an earlier High Court ruling in which a father was found guilty of assaulting his 13-year-old son. In that ruling court, court found that the father had exceeded the bounds of reasonable chastisement.

The father, who was punishing his son for watching pornography, had argued that he had a right to chastise his son, in accordance with his religious beliefs.

The group argued that the state should not interfere with parents who are mandated by the Bible to physically correct their children.

These laws are only made by people without kids…….#ConCourt

If my kids will be conceived, clothed, fed and provided shelter for by the #ConCourt then they will not get spanked
I rest my case your honor pic.twitter.com/LcyxrflvuH

No one is gonna get arrested for spanking their kids.

Constable Mazibuko will never open a docket for a kid who says that his/her parent spanked him/her.

People are actually angry that the highest court has ruled that they cannot beat defenseless human beings? #ConCourt pic.twitter.com/ruITz7lvxh

This #concourt crap is why alot of black kids misbehave and are uncontrollable, NO COURT OR GOVERNMENT WILL TELL ME HOW TO RAISE MY CHILDREN. IF MY KIDS ARE BEING UNRULY AND DISRESPECTFUL, I WILL DISCIPLINE THEM… Finish??‍♂️

#ConCourt Rules that Hitting Your Child at Home is Unlawful

The bible says don’t fail to discipline your children. The rod of punishment won’t kill them.

My children will have to chose to live home or #concourt pic.twitter.com/zgpDLsYT41

Imagine coming back home to this surprise and you can't spank them because it unconstitutional ? eyoh Angeke I might as well take them to #ConCourt and lay charges for malicious damage to property they must serve time. pic.twitter.com/bq3OvSaC5H