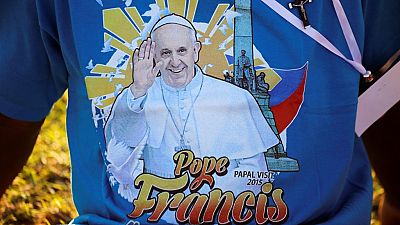 Pope Francis said Tuesday that Britain should obey a U.N. resolution and return to Mauritius a disputed Indian Ocean archipelago that hosts the U.S. military base at Diego Garcia.

Francis cited Catholic doctrine in responding to a question about the Chagos Islands during an in-flight press conference as he flew home from a visit to three African countries, including Mauritius.

Francis said when countries give international organizations such as the United Nations or international tribunals the right to adjudicate disputes, those decisions must be respected.

“It’s true that not always things that seem ‘just’ for all of humanity are ‘just’ for our pockets,” he said. “But you must obey international institutions.”

Earlier this year, the U.N. General Assembly voted overwhelmingly to demand that Britain, which held onto the Chagos Islands after granting Mauritius independence in 1968, end its “colonial administration” and return the Chagos Islands to Mauritius.

The vote was taken after the International Court of Justice issued an advisory opinion in February saying that Britain illegally carved up Mauritius when it kept Chagos.

Britain, which calls the archipelago a “British Indian Ocean Territory,” has refused to abide by both non-binding decisions. It has argued that the archipelago never really belonged to Mauritius and that its continued presence there is strategically important.

Britain evicted about 2,000 people from the Chagos Islands in the 1960s and 1970s so the U.S. military could build the Diego Garcia air base. Some of the evacuees have lobbied ever since to be able to return, and a delegation attended Francis’ Mass on Tuesday in the Mauritian capital of Port Louis.

Francis is believed to be sympathetic to their plight, given that when he was archbishop of Buenos Aires, he spoke out against the British claim to the Falkland Islands, which Argentines call the Islas Malvinas.

The Chagos dispute came up during Francis’ meeting with the Mauritian president and prime minister, both of whom used their public speeches to thank Francis for the Vatican’s “moral support” in the dispute.

Francis said obeying international decisions was a sign of “fraternity” and “civility” among nations. He also noted that European powers have a history of trying to hold onto chunks of their former African colonies for continued financial gain, though he said he didn’t know if that was the case in Britain’s decision to keep Chagos.

While some liberation movements “worked out well, there is always the temptation to keep something in your pocket,” he said.