Kenyans raise over $20,000 in one hour for teenager's cancer treatment 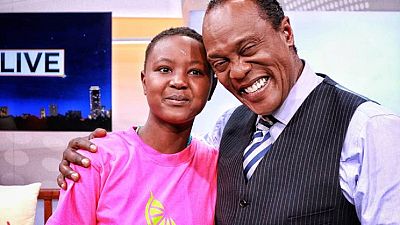 Kenyans raised over 20,000USD (2million KShs) in hour to help a young girl raise funds for a cancer treatment.

13-year-old Bianca Wambui fighting breast cancer was hosted on a local television show that brought her to the attention of well wishers that gave generously.

Here is Bianca Wambui’s paybill number; Bianca is a 13-year-old diagnosed with breast cancer. She has had a mastectomy done but no radiotherapy/ chemotherapy due to lack of finances

The teenage had only 120USD (12,000KShs) in her mobile money kitty when she started the show but by the end of broadcast she has over 2 million Kenyans shillings to access medication.

The host of the show, Jeff Koinange, quoted the figure at the end of the show. It turned out that donors continued giving even after the show. The donation had hit 3 million shillings as at midday of Thursday, August 29.

Kenya boasts a very vibrant social media space – especially with respect to Twitter. Kenyans have in the past used the platform for activism on a wide range of issues from politics, justice, entertainment etc.

In a recent case; outrage on Twitter “forced” authorities to pay attention to an ailing giraffe in a national park. The rothschild giraffe, an endangered specie, was suffering from a bone tumour.

“Led by Dr. Titus Kaitho, our vet team administered a palliative treatment of antibiotics and anti-inflammatory drugs and the giraffe will be closely monitored,” the Wildlife Service wrote on Twitter.

Some took to Twitter to express their solidarity with the 13-year-old cancer warrior.

The love that Kenyans have for each other is Magical…I think politicians are the ones that poisons and separate us…More than 2M in one hour for this kid!!! #JKLive pic.twitter.com/hpfZ8OKpgM

Bianca Wambui, fighting breast cancer at 13 and being financially disadvantaged can be quite something. Your fighter spirit is however evident. Citizentvkenya KoinangeJeff #JKL #JKLive pic.twitter.com/hCDBcAaTIK

A country with people obsessed with primitive accumulation of wealth and yet Bianca Wambui cannot get treated for cancer due to lack of funds?

Dear nhifkenya, Let us help Bianca Wambui get treated. I am offering my StateHouseKenya maintained NHIF cover. Allow me to add Bianca as my dependant tomorrow morning and we can have this young girl treated. Fair enough, NHIF #UHC #JKLive