Chaos in Pretoria as Taxi drivers protest murder of colleague 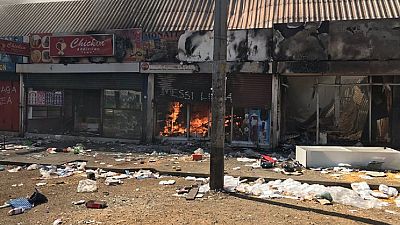 Reports coming out of South Africa show chaos in Pretoria as protests by taxi drivers to decry murder of fellow driver turn chaotic.

According to News 24 the taxi found people believed to be police officers allegedly selling drugs. Shots were fired leading to the death of the taxi driver. Angry taxi operators took to the streets and blocked them roads to deal with the drug peddlers.

#pretoriacbd Jabu was killed yesterday while trying to save our nation .Our condolences to family , friends and Taxi industry as whole . pic.twitter.com/3d7sW9hlm7

“A shooting which resulted in the death of a taxi driver is reported to have incited the riots, which led to two A Re Yeng buses, three Tshwane Bus Service (TBS) buses, a Gautrain bus and two trucks being utilised to blockade the roads. A Re Yeng and TBS operations were halted for the rest of the day in the interest of safety,” Tshwane Transport MMC Sheila Senkubuge is quotedto say.

Several foreign owned shops have been looted in the Pretoria city centre on Wednesday by the angry protesters. Allegedly claiming that the taxi driver was trying to stop the peddler from selling drugs to a potential buyer.

Police are now pushing the taxi drivers back, dozens of shops have been looted. This all stemmed from an incident yesterday where it’s alleged that a taxi driver was shot by a drug dealer #PretoriaCBD (AlexMitchley) pic.twitter.com/8VOdVHdY2B

Ipi Ntombi is Burnt down ???????
The struggle is real#PretoriaCBD pic.twitter.com/0bpd3JjplV

#pretoriacbd | A taxi driver recalls how a fellow driver was brutally shot in the head yesterday. He says they are mourning their brother. The driver has vowed to shutdown the city until police minister Bheki Cele has addressed them. pic.twitter.com/nANH8mvG9A

There are a huge number of tweets are blaming Nigerians for the death and pinning them as the drug dealers.

So South Africans are fighting each other in Sunnyside #pretoriacbd because of Nigerians !!! pic.twitter.com/yrcztirySn

Avoid using Pretoria CBD routes today. Apparently a South African man was shot by Nigerians after witnessing them selling drugs and seeing the actual supplier. May his soul Rest In Peace! ???? #pretoriacbd pic.twitter.com/uGrmgjSzFl

The Taxi driver who was shot dead while trying to stop Nigerian drug dealers from selling drugs to young boys at #pretoriacbd is a national hero and deserves a state funeral. As a nation we can’t continue to watch people destroying our countries youth while we do nothing about it pic.twitter.com/CIMioWx6PZ