Inside Sudan's 11-member Sovereign Council: All you need to know 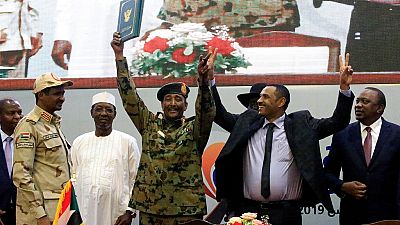 Sudan’s pro-democracy movement and the army announced a joint ruling body on Tuesday. The new, 11-member body — called the Sovereign Council — has since been sworn in as at Wednesday.

The Sovereign Council formally brings an end to the reign of the military junta, Transitional Military Council – TMC, that took power after the ouster of longtime president Omar al-Bashir in April.

The Council is to rule Sudan for a little over three years until elections can be held. The two parties – protest leaders, army – officially signed a transitional power sharing agreement on August 17 after months of political and mediation back and forth.

The military composition of the SC

A civilian leader appointed by the protest movement is to follow Burhan for the next 18 months, according to the deal.

Dagalo, also known as Hemedti, has consolidated power since al-Bashir’s overthrow, and is the commander of the paramilitary Rapid Support Forces. Protesters accuse the RSF of leading the crackdown against them since the brutal break-up of their sit-in camp in Khartoum earlier in June.

The civilian composition of the SC

Among the five council members named by the pro-democracy movement are a woman and a journalist.

Both sides agreed on the appointment of a Coptic Christian judge, Raja Nicholas Issa, as the 11th member of the council. All council members took their oath of office before the country’s top judge and Burhan on Wednesday.

How protests came to topple Bashir

Mass demonstrations initially erupted in Sudan in December 2018 over dire economic conditions but quickly turned into calls for al-Bashir to step down after three decades in power.

The military later overthrew the leader, but protesters have continued to take to the streets and demand a swift transition to civilian government, fearing the military could cling to power.

The tortuous negotiations over the joint military and civilian council went on over the last few months despite a deadly security crackdown. At least 250 people have been killed protests began, according to organizers.

The deal also includes a protest movement-appointed Cabinet along with a legislative council with a majority from the Forces for the Declaration of Freedom and Change, the main protest coalition. The legislative body is to assemble within three months.

Protest leaders nominated a well-known economist, Abdalla Hamdok, to serve as prime minister during the transition. He had till now been the deputy executive secretary of the United Nations Economic Commission for Africa since November 2011.

Hamdok was also sworn in on Saturday and is expected to name a cabinet in the coming days. Analysts and security watchers have held that the formation of a cabinet will be another crucial step in the transition process.

The military is to nominate the defense and interior ministers in the transitional government, according to the deal.

Al-Bashir, who came to power in an Islamist-backed military coup in 1989, had failed to keep the peace in the religiously and ethnically diverse Sudan, losing three quarters of the country’s oil wealth when the mainly animist and Christian south seceded in 2011 following a referendum. That loss of oil revenue plunged the economy into a protracted crisis that continues to this day.

Sudan has also been convulsed by rebellions in its far-flung provinces for decades, and while a rebel alliance has joined the pro-democracy coalition, it said last week that it should be represented in the transitional government.

The power-sharing deal calls for the government to reach a peace agreement with the rebels within six months.