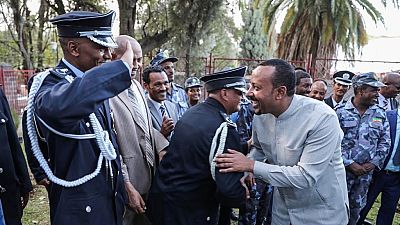 A branch of Ethiopia’s federal police has detained a number of police and local government officials in connection with recent deadly violence in the Oromia regional state.

“They are suspected of involvement in the killing that took place on August 08, which involved armed groups,” the official is quoted to have said.

The suspects were detained this morning and are due to be arraigned before a local court soon. The official, however, declined to give names. “The seven suspects were apprehended due to community cooperation,” he added.

Amongst them are senior woreda administrators and police officers. They are being probed in connection with violence that claimed at least ten lives in Oromia’s West haraghe zone.

Aside the death, Addis Standard added that “at least five more were injured on August 08 when gunmen attacked villagers in Bordede Woreda Gumbi kebele, Gimjabet area of West Hararghe of Oromia regional state.”

Reports indicate that federal security officers deployed in the wake of the incident are still patrolling the area. Community efforts are also continuing to help apprehend other persons behind the violence.

Oromia is Ethiopia’s biggest and most populous region. It is the home region of Prime Minister Abiy Ahmed whose administration has seen a spike in ethnically based violence.