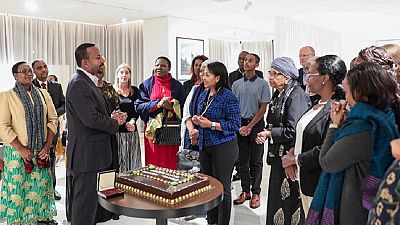 Also in attendance aside Sirleaf was Executive Director of United Nation’s Women, Phumzile Mlambo. The women joined Abiy for a cake cutting ceremony after engaging each other.

The facilitator, Dr. Fisseha, is an Ethiopian physician and lawyer who is currently serving as a special advisor to Tedros Ghebreyesus, the World Health Organization head.

Abiy during the meeting cited the importance of women leaders driving political and social change, whiles expressing his gratitude to women’s leadership advocates like the facilitator.

Abiy also awarded Dr. Senait Fisseha for what his office said was “her continued support to Ethiopia, particularly in the health sector.” She was decorated with a medal.

Sirleaf, Mlambo and the appointees joined Abiy to also plant trees on the premises of his office as part of the Green Legacy project under which Ethiopia is aiming to plant four billion trees nationwide.

Abiy’s women appointment dates back to last year when he name a gender-par cabinet, the first in Ethiopia’s history. Ten women were named with sensitive ministries like Defence and Peace portfolios handed to women.

The Defence portfolio has, however, reverted to a man during a cabinet reshuffle months later. Ethiopian lawmakers also appointed its first president in the person of Sahle-Work Zewde.

The current Chief Justice is also a woman, Meaza Ashenafi, another historic appointment. Head of the elections body is Birtukan Mideksa, a former High Court judge who returned from exile to take the position.