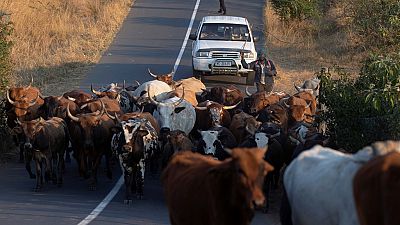 Cattle have long been considered a measure of wealth across Africa but it is not just farmers cashing in.

A pioneering app in South Africa allows investors, eager to benefit from rising global beef demand, buy shares in a cow from their mobile phone for as little as ($41).

Launched in 2015 with 26 cows, the project now includes more than 2,000 cows and has taken in 50 million rand, with 10 percent of investors coming from outside South Africa.

We started off on this farm four years ago with just 26 cows. Across the platform now we have more than 2,000 cows.

“We started off on this farm four years ago with just 26 cows. Across the platform now we have more than 2,000 cows that people have invested in. Some people own 26 cows, one person, and others own a fraction of the cow where we group 20 people around one cow. So we see this growth into us being an international company where people can invest from anywhere in the world; Founder and CEO, Ntuthujo Shezi.

Launched in 2015 with 26 cows, the project now includes more than 2,000 cows and has taken in above $3 million , with 10 percent of investors coming from outside South Africa.

“An investor coming into Live Stock Wealth can invest in an unborn baby of a pregnant cow for 18,000 rand. After that baby is born and sold, that process takes 12 months, that person’s 18,000 rand has earned an income of 2,000 rand so that he gets 20,000 rand. So that becomes an 11% per annum return on investment,” Shezi explained.

As with any investment, however, risks exist. Both the impact of weather on feed costs and fluctuations in global demand for beef can affect the cow investments.

Shezi now hopes to expand his business into the produce market after launching a vegetable growing system this month that aims to give about $15 return per month over five years.